1. What to do about the Tesla Challenge?

Tesla’s gotten a lot faster since my article in September 2019. On the one hand, the stock market value of the California-based company ($131.0 billion) currently exceeds1 the sum of those of Volkswagen ($81.7 billion) and BMW ($43.3 billion). It has also chosen a site in Germany, near Berlin, to host the next Gigafactory. In addition, the Shanghai Gigafactory has started production. Faced with these signals, how are European players in the automotive sector organizing themselves to meet the challenge? 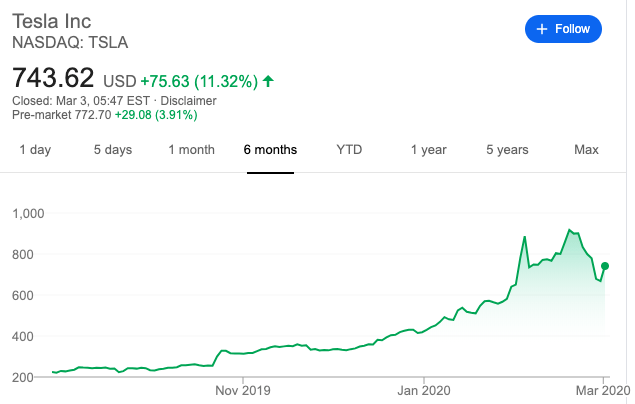 b. The rise is not just speculative

The rise in the share price could appear to be at least partly the result of speculative gambling.
But it’s hard to know what it really is. One thing is certain: the billions lost by speculators on the downside are not enough to discourage them for the time being. There are still big speculators betting heavily on Tesla’s failure. In absolute terms, Elon Musk would probably prefer Tesla not to be listed on the stock market, but he’s the one with the smile on his face right now.

With 367,500 vehicles sold in 2019 by Tesla (out of 895,362 since 2013), the market seems to be favoring the scenario of a successful scale-up and a sustained technological lead. The control and command technology would be six years ahead of the competition. Good news on battery life is expected in the coming months at Battery Investor Day2. The vulnerabilities of the organization3 seem to have been completely forgotten.

One of Tesla’s goals4 is to substitute its automotive products for the existing industry as a whole. This threat is now being addressed by the players in the automotive industry, including national and European public authorities. Their response to the Tesla challenge is to add an industrial policy component to the arrangements for reducing greenhouse gas emissions. The specificity of these schemes is to make technologies competitive on the market that would otherwise not be competitive5. Another type of response, based solely on market considerations, is to explore breakthrough technologies.

Let us now examine these two types of responses in their concrete expressions.

2. A political response to the Tesla challenge: catching up with Europe

The Mosquet-Pélata report (in the rest of the article: “Pélata report” or “the report”) was published about a year ago. It proposes an industrial policy to catch up with France and Europe in terms of batteries and connected and autonomous vehicles6.

The report recalls that the evolution of the European regulatory framework makes electric and hybrid vehicles a must for manufacturers. On the subject of batteries, it defends the principle of creating a European industry, because of the share of this component in the value of an electric vehicle. This recommendation is also in line with the strategy of German Industry Minister Peter Altmaier, which aims to create three industrial consortia producing batteries (cells and recycling), including a Franco-German one. In addition, one of the obstacles likely to hinder the project has been removed: the European Commission’s Competition Directorate has announced that it will not oppose government aid to create an “Airbus of batteries”. However, apart from Saft7, industrial players such as PSA8 are still reluctant to participate in the project. The battery project, which would start from scratch, is indeed very risky… and it is for this reason that the Commission does not oppose government aid: the possible success of the project would increase the competitiveness of the market9 by adding a player.

Let’s move on to the autonomous vehicle. One of the major challenges of the autonomous vehicle is the implementation of big data. A link can, therefore, be established between this need and the European cloud project led by Bruno Le Maire and Peter Altmaier. In the same way, this subject also depends on the industrial strategy of artificial intelligence. On the German side, all of these technological themes are on the agenda of Industry 4.0.

Big data projects are not unprecedented, including in the automotive sector. The report notes on p. 38:

In France, initiatives have been taken to set up rolling databases, including in collaboration with German players (Pegasus project). However, the results are inconclusive, and little data has been shared in this way. A strong relaunch is therefore necessary.

As far as the Pegasus project is concerned, a visit to the site suggests that there is in fact no French partner.

Mapping is another example of a key technology for connected mobility, as noted on p. 37:

As far as mapping is concerned, in order to fill the gap on HD mapping, it seems useful to investigate the need to provide France with high-definition mapping technology for autonomous driving as the Germans have done.

The German manufacturers BMW, Audi, and Daimler have a European technological solution at their disposal through the acquisition in 2015 of Here, developed by Nokia.

The impression that emerges from the Pélata report with regard to the connected and autonomous vehicle is that a European industrial ecosystem has in fact already begun to develop around this subject, notably thanks to the competitiveness clusters in France.

b. An electrical diary that leaves little choice to industrial players

For a manufacturer, the current policy of reducing greenhouse gas emissions makes it increasingly suicidal not to sell battery-powered vehicles. The Pélata report proposes a strategy to make the sale of battery-powered vehicles profitable. Industrial players are ultimately invited to take ownership and bear the risk of a technological solution made unavoidable by the policy.

c. The risk of a closed technology agenda

There is a danger in such a political orientation of the technology agenda, even assuming that the battery-powered vehicle would be the best long-term approach to reducing greenhouse gas emissions. For while European policy decrees that the battery vehicle does not emit greenhouse gases, we cannot but note that a large proportion of the electricity currently produced in China and Germany comes from coal-fired power stations10, resulting in a high level of CO2 emissions for electric vehicles – higher than that of modern internal combustion engines. In the context of the current energy system, electric vehicles are certainly useful for the local reduction of urban pollution, but they also contribute to global greenhouse gas emissions.

China has stopped subsidizing electric vehicles. As a result, manufacturers there now have more freedom to explore the space of green mobility technologies. Especially in comparison with what is happening in Europe, where the closing of the technology agenda is having a blocking effect.

3. Responding to the Tesla Challenge by re-opening the parameters of technology exploration

a. Back to basics

Beware of the idea that a subsidy can determine an industrial decision. Although Tesla also owes its survival to its ability to make the most of the subsidies that accompany the energy transition, I reject the notion that this factor can be considered to be at the root of its adventure.

Subsidies are not a factor on which a company can sustainably rely. As Bernard Jullien recently pointed out in a fascinating article on the situation of electromobility in France after the Pélata report:

as measured in China in 2019 and as is taking shape in France for 2020 and even more so for 2021, the subsidies that consumers receive to acquire these vehicles will not be sustainable and the amortization of the efforts made to develop them will be conditioned by the manufacturers’ ability to find “real” demand at prices that will remain high in the next two to three years in any case.

An industrial decision is ultimately the result of a profitability calculation. If an industrial player believes that it cannot make money from the electric vehicles it produces, the obligation to produce them will be for it something between a headache and a cost to continue doing business11.

b. Other mobility technologies

This exciting panorama gives a first idea of the technological options available for green mobility. However, have all the existing technological avenues been sufficiently examined? In my opinion, the report does not exhaust the fundamental question of the optimal technological strategy for reducing greenhouse gas emissions. This question is a point to be addressed in a future article.

c. The issue of the mobility industrial platform

The industrial platform is another aspect that merits further examination. Tesla’s Gigafactories13 are not just battery plants. The one in Shanghai produces vehicles. The one planned in Grünheide14 near Berlin is to produce vehicles and batteries. The one in Buffalo produces solar panels. Only the factory in Sparks, Nevada, produces exclusively batteries.

One prospect to be taken seriously15 is that these factories could themselves become products, or even, why not, a functional service to which other manufacturers could subscribe16.

After reading the Pélata report, an industrial player in the automotive sector will, therefore, have a choice between two scenarios. One, recommended by the authors, is that of catching up. The other is to prepare for the next wave and develop other breakthrough products.

As for Tesla: isn’t everything a question of timing? We will see in two years’ time whether the company’s current valuation is fully justified… and who among the current manufacturers will have been able to take up the challenge posed by this newcomer.