The second round of Tesla vs German carmakers 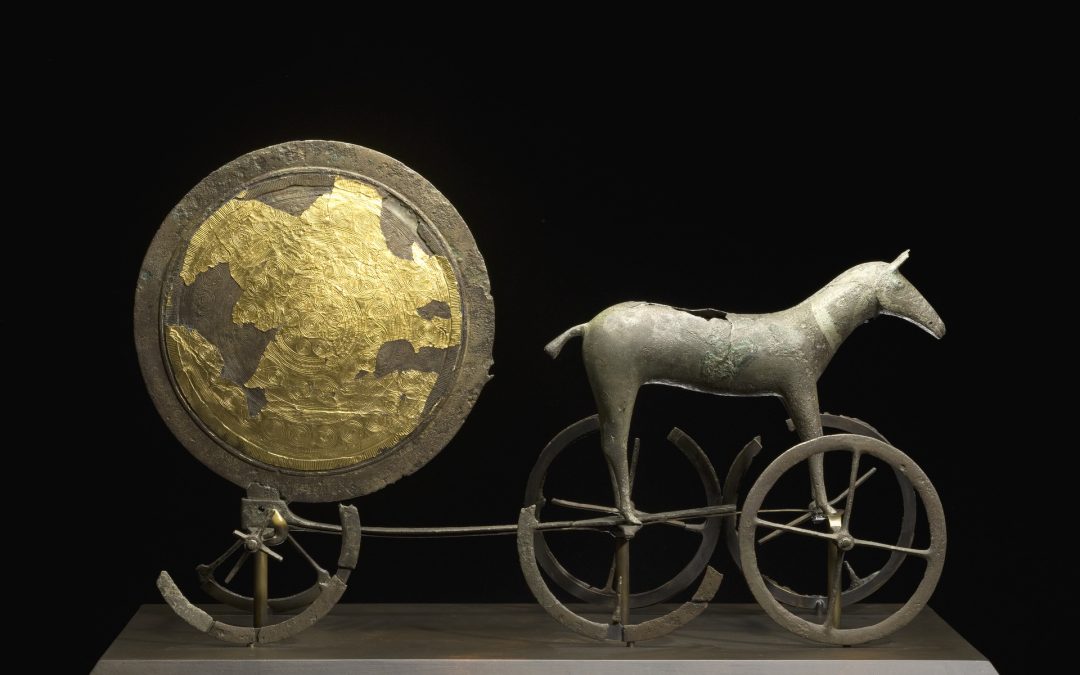 In a post last year on Open Organization and LinkedIn, I concluded my analysis of Tesla with three evolution scenarios. Where are we today ? I had also applied the reading key of open organization developed by Presans to the future of the German automotive industry. How is it evolving now? Finally, more generally: what lessons can we learn from the confrontation between Tesla and the German manufacturers regarding the ultimate determinants of electric mobility?

The market value of Tesla has been on the decline for a year. Fewer people today believe in the dream of a builder who would take the place of everyone else. This revision of the Tesla value is largely due to scale-up problems encountered in the production of Model 3. These problems persist. Tesla is currently struggling to deliver, and even to guarantee a good finish. The excitement can be seen in the recent reversals of physical sales sites, price changes, and the priority of delivery of non-basic versions. This last point also casts doubt on the profitability of Model 3 for $ 35k. Dozens of executives have left the company. The behavior of Elon Musk raises questions from the investor Baillie Gifford, who would prefer a communication borrowing more from the style of Jeff Bezos. Elon Musk continues to announce elastic goals and new activities (the latest one: insurer). His costly misadventure with the regulatory authority following a tweet announcing the withdrawal of the purse of Tesla (“funding secured”) did not really cold.

If the Gigafactories were working properly, all these problems would not exist. So, at the very least, Gigafactory does not work properly. This is what common sense dictates. In fact, the second Gigafactory, located in Buffalo, seems to have been a disaster so far total, at the price of $ 750M of public aid. The failure of the plant goes hand in hand with the failure of Tesla’s solar panel business, which comes as a result of its acquisition of SolarCity (and the heavy debt of SolarCity). A failure that could cost a lot in trial at Tesla. On the one hand because the company may not meet its employment commitments. On the other hand, Walmart and Amazon are suing Tesla for panel fires installed on warehouse roofs.

The next Gigafactory will open in Shanghai. On the one hand, this location helps to better overcome the troubles caused by the current Sino-US trade war. But this plant also hopes to contribute massively and quickly to solving the problem of scaling up the production of Model 3. The city of Shanghai has provided for punitive contractual provisions in case of breach of its commitments of the from Tesla. Perhaps a partial, or even total, acquisition of Tesla by a Chinese actor could be realized by this tortuous way in case of failure of the American firm … or then, from the point of view of Donald Trump, a casus belli?

As for a factory in Europe, nothing concrete seems to be emerging at the moment.

Buffalo is right next to Niagara Falls. This is one of three sites chosen by Porsche to launch the Taycan in great fanfare on September 4, 2019.

2. German automotive industry: the way of the turtle

Recall the basic data: the Tesla S model has and continues to put a huge slap to the German manufacturers, who so far dominated the segment of high-end.

The three big German players are VW, Daimler and BMW. Let’s start with VW, which also owns the Porsche and Audi brands.

VW is emerging from an unprecedented public relations disaster following the revelation of the rigging of its diesel engine emissions that broke out exactly four years ago. This crisis has been deeply questioned, notably by the renowned consultant Fredmund Malik. Finished, the arrogant claim to embody “the car” (“Das Auto”). VW now has a new logo and motto: “Emission free mobility for all”. And the first model to carry the new logo will be the ID.3, which is positioned as a competitor of the Model 3. VW has developed a new industrial platform named MEB dedicated to electric vehicles, and announced massive investments in the development of batteries. In the immediate future, its Audi brand now offers the E-Tron (sic), an SUV that competes with Tesla’s Model X, and its already mentioned Taycan Porsche brand, which aims to dethrone the Model S.

On the Daimler side, the transformation towards electricity also involves an investment program of the same order of magnitude as that of VW (10 billion euros). The first model of the EQ line will be the EQC, an SUV deliverable for a small number of customers selected according to an “EQ Ready Score”, but available for the rest of the market only from 2020. An investment from Daimler had formerly saved Tesla, and from time to time vague possibilities of cooperation are evoked, quite recently on utilities. But the time for cooperation seems well and well over.

BMW’s attitude differs from that of VW and Daimler, particularly in the recent remarks by Klaus Fröhlich, Development Director of the Bavarian firm. According to him, consumer demand remains paramount for BMW, and this demand would not be the same everywhere. The goal is to be able to offer thermal, hybrid and electric engines for all models. A modular vision that is in opposition to the hype of all-electric, which he believes permeates too much ambient speech.

One of the limiting factors of production lies in batteries (see our case study based on a project with Valeo). All manufacturers have partnered with Chinese suppliers to develop tailored solutions.

On paper, the impending transformation may seem impressive. In fact, the specialization and even the perfectionism in the thermal engines are so strong in the German car industry that it will be constantly tempted to delay its transformation towards electric mobility. It is worth remembering that electric propulsion also disrupts the economic model of manufacturers and distributors. Electrification decreases the costs of car maintenance.

It is the regulatory constraints and the success of Tesla that are causing the ongoing transformation. In honor of the Germans, they take up the challenge head-on. But, for the moment, the spirit of the transformation of this industry is more imitative than truly inspired by a desire to conquer.

3. The keys to electric mobility

Why speak of will to conquer in this context? The fact is that the performances of the German models do not seem to outperform those of the Tesla models. Porsche’s communication around the launch of Taycan aimed to situate the sports performance of this model over the Model S. Has it succeeded? 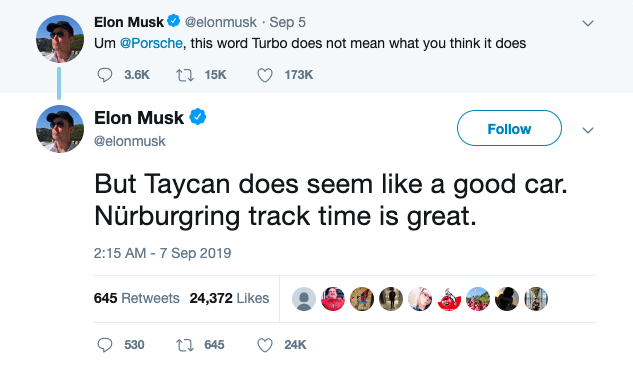 The Taycan will be the first mass-produced electric car with a two-speed gearbox, providing high torque at low speeds and high speeds. It’s a beginning, but Elon Musk does not seem unduly destabilized.

Perhaps I have not emphasized enough so far a point that may seem obvious: with the Model S, Tesla has upset the automotive sector not by offering an electric car, but by offering the best car in its category. In doing so, Tesla returned to gasoline, establishing a direct line between the tank drivers of our protohistory and the Tesla drivers, conquerors of a new form, a higher form of mobility, a new sense of freedom. Hence the choice of the image that adorns this post: solar power, mobility, the spirit of conquest, everything is there. If Tesla goes dark, his adventure will at least have shown how to totally transform the perception of a technology.

The choices of the German car industry show that it does not really want to outperform Tesla in terms of product. Doing about as good as Tesla on the car, bringing a touch of diversity, and hoping to do better on the rest seems to be the strategy here. Winning by doing better on the rest presupposes basically that Tesla fails in its passage to scale. If Tesla does not fail, if things stabilize, if Tesla becomes completely reliable … what is the German plan, in this case?

At the time of writing, Tesla’s prospects look as uncertain as the actions of the German auto industry seem soft. The disorganization of Tesla could lead to jeopardizing the future of a product that the German automotive industry, engaged in a transformation that looks to be slow, also fails to match.

If Tesla stabilizes, the Germans are in a very bad position. If the Tesla are constantly better and cheaper, they will almost completely replace the models of other manufacturers.

But if Tesla disappears, the main motivation of the Germans to transform themselves weakens. For no leader spontaneously wants to compete with his own dominant position. But, as in the fable, the turtle can prevail over the rabbit. Recharge your batteries, ladies, gentlemen, dear rabbits and dear turtles, the competition is just beginning.