Recent advances in the field of batteries represent a significant technological breakthrough. However, the triumphant running speeds sometimes lent to the evolution of the battery-powered vehicle are premature. In particular, hydrogen-based technologies, both competing and complementary, can play a major role in mobility and energy storage. And it is not certain that the greatest potential for hydrogen disruption is limited to these energy applications.

New projects exploring the industrial potential of hydrogen energy continue to be launched1. Among the most ambitious in Europe is the NortH2 green hydrogen project at Eemshaven in Holland, which plans to first study the production of hydrogen from the fatal energy generated by a new wind farm.

The construction of large electrolysers, with the associated distribution infrastructure, is certainly one of the main thrusts of the prevailing pro-hydrogen argument. The companies AREVA H2GEN (France) and Hydrogenics (Canada) fit exactly into this niche. Electrolysers of course also operate with electricity produced by a nuclear power plant. EDF2 intends to apply this principle3.

In the field of storage, European companies are innovating:

1.3. The challenges of hydrogen mobility

The advantages of hydrogen vehicles lie in their autonomy and the speed of their recharging; however, the recharging network is poorly developed. These vehicles do not emit greenhouse gases provided they are powered by green hydrogen, which is also scarcely available. Energy efficiency suffers from the need to compress hydrogen. Finally, standard fuel cells remain very expensive because they use platinum. Overall, hydrogen vehicles are currently not competitive with battery-powered vehicles. Nothing new from this point of view, therefore.

2. The advance of the battery electric vehicle

2.1. Batteries have gained a lot in performance 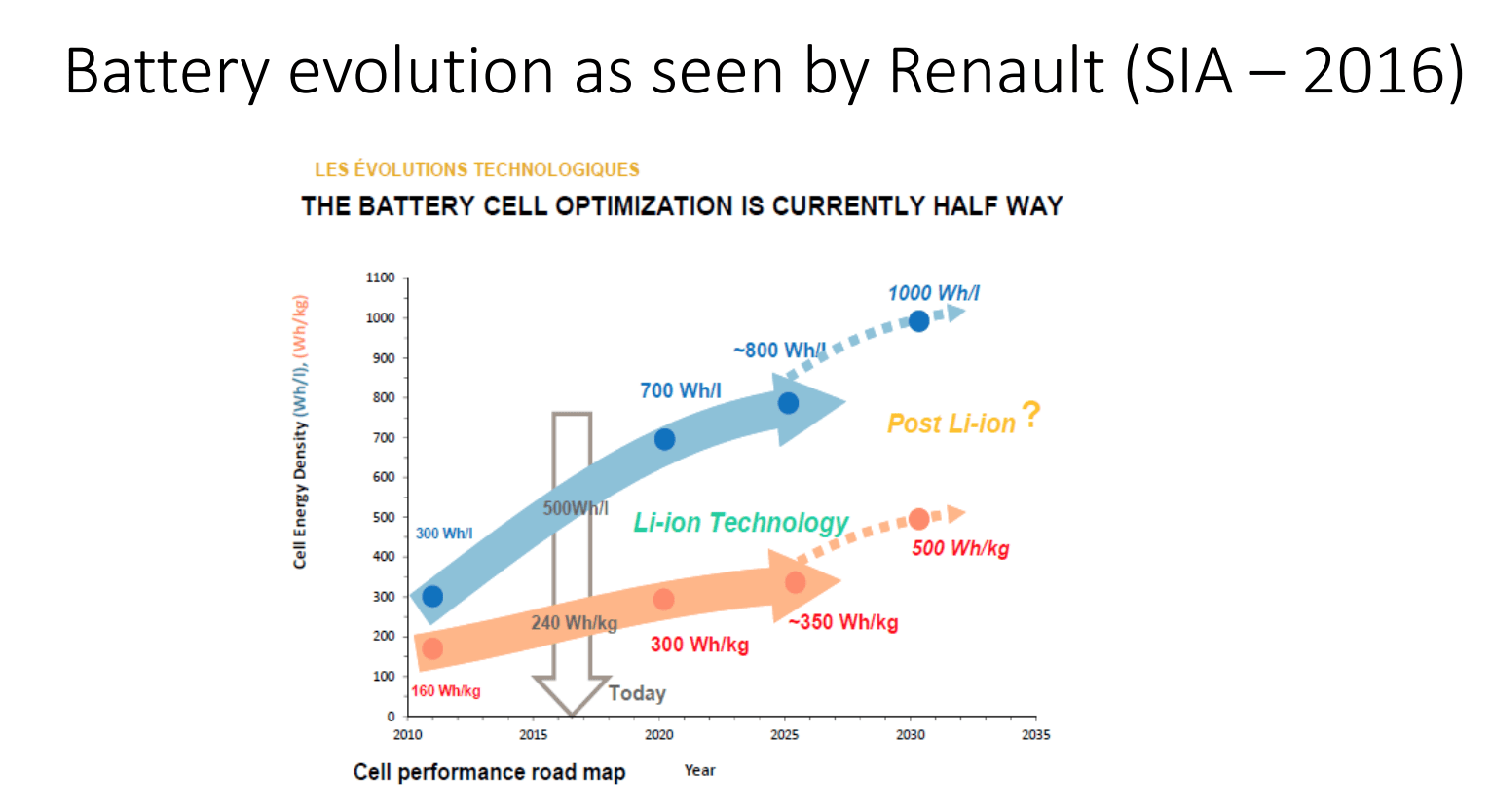 The performance gains of lithium-ion batteries already allow a range of 600 km under favourable conditions, and the future should bring further gains. Tesla announces batteries with a life expectancy of more than 1.6M km.

2.2. There is currently greater political support for battery-powered vehicles in France

Let us briefly recall the objectives of European environmental policy, as well as some of the measures adopted to achieve them:

2020: new European CO2 emissions standard of 95 g/km on average, applicable to 95% of passenger cars sold by all manufacturers in the EU, with a penalty of €95 per excess gram per vehicle sold.

2.3. The game is not won for battery-powered vehicles

Commercial take-off and economic viability outside of subsidies of the battery-powered vehicle are not confirmed. The year 2020 could be decisive from this point of view. One of the obstacles lies in consumer mistrust of the performance of battery vehicles in terms of range, behaviour in cold conditions, recharging time.

Moreover, the automotive industry is already weakened in a context of global trade war and epidemic shock caused by the covid-19 virus8. If European manufacturers fail to meet the annual emissions reduction target, the fines are likely to reach tens of billions of euros. This is enough to sink several industrial groups. This prospect could give the authorities in European countries food for thought.

Finally, emissions are only nominally zero if the electricity production system emits CO2.

Green mobility scenarios are generally presented as combinations, in varying proportions, of battery-powered and hydrogen-powered vehicles. One of the decisive factors in these scenarios are the policy levers adopted to promote the adoption of green technologies by 2050. But we have seen that while political power can make a technology choice prohibitively expensive, it is less obvious to make a technology economically viable over time. The choice by a political centre of the technology to be adopted by industrial actors is not immune to error. Admittedly, industrialists are exposed to the same risk. Nevertheless, there is a difference, which is that industrialists, left to their own calculations, will probably never all fail at the same time.

3.2. The problem of industrial timing

An important aspect of the problem is timing. Subsidising the battery vehicle, or decreeing the end of the diesel vehicle, or even the internal combustion vehicle, is also a question of managing technologies over time. Technologies, and everything behind them in terms of investment in industrial skills. The risk of industrial timing errors is a crucial issue.

Since at least the 1987 Brundtland Report, environmental policies have been based on the idea that the market is incapable of integrating the needs of environmental protection. Far be it from us to deny the need to regulate industrial activity. However, making technological choices can lead to a lack of interest in other directions.

The year 2020 is perceived by many actors and observers as a pivotal year for the mobility sector. The new environmental standards are not to blame for this. Either the electric vehicle will take off massively, or the policy adopted by the countries of the European Union will find itself in an impasse. A broader systemic perspective will be needed to overcome this impasse.