A new technology strategy for the green economy

The risk of climate change must not be forgotten in the context of the current health crisis. This systemic risk has, as everyone knows, already led to a major revision of the global industrial agenda, in the form of the energy transition1. Our thesis is that a re-examination of the dominant strategic model generally put forward to achieve this objective is now justified. In order to establish this proposal, we need to :

For readers in a hurry: start with the third part, because the first two parts contain information that many readers already know: they are there to explain the background of the reasoning.

In the case at hand, we are not discussing how we represent risk, but only proposing a new lever of action. But to do so, we must first recall the existing levers of action.

1.1. The levers of action already known

Within the energy transition, the main lever of action to control the risk of climate change is that of green technological substitutes that make it possible to reduce the level of greenhouse gas emissions while maintaining or increasing the level of industrial activity. The reduction of activity and the adoption of new consumption and lifestyle behaviours complete this lever.

Among the alternative green technologies, we find :

These alternative green technologies face a number of problems, some of which are still under development. For example, the electric vehicle does not yet inspire full confidence among the mass of consumers. But on the whole, their problem is not one of technological competitiveness. The main problem is that most of these technologies are not economically competitive with carbon-based technologies.

The current very low level of the petrol price3 leads us to consider that this major problem will not disappear on its own quickly.

1.3. The toolbox of the dominant model in the face of these problems

The approach of governments and international organizations makes extensive use of the concept of economic externality. An externality is the positive or negative change in the utility of an economic agent caused by the choices of another agent. For example, pollution of a river caused by a pharmaceutical factory affects the use of the river by other actors. This is a case of a negative externality. Global warming is similarly understood within the dominant model of energy transition as a negative externality.

In essence, externalities escape systemic regulation by the existing market. However, public authorities can internalise these factors by establishing new rules to encourage or discourage the behaviour that causes the externalities. In this way, they artificially create a new market4. In our example, a new regulation may lead the plant to reduce the use of certain polluting substances or face material penalties. In order to make this regulation work, the authorities regularly take measures to analyse the quality of the river water, or even directly analyse the content of the factory’s waste.

As part of the fight against global warming through the energy transition, we thus find an arsenal of devices aimed primarily at measuring the level of emissions associated with all human activities. A carbon market5 is then set up for industrial activities, aiming to give a material advantage to players who reduce their emissions, or who emit little greenhouse gas. The advantage takes the form of a right to pollute, whose value depends on the market price of carbon.

Some measures are sector-specific. The oil sector is subject to significant taxes on its main product. The automobile sector must apply standards limiting the level of vehicle emissions, under penalty of material sanctions. It also benefits from targeted incentives, such as subsidies for the purchase of electric vehicles. The energy sector is also subject to measures to promote the development of renewable energies6.

The main shortcoming of the dominant policy model is that in the face of the lack of competitiveness of green technologies, its toolbox is limited to policy solutions. In the automotive sector, it is no exaggeration to say that the stringency of new standards is such that it is in fact politics that takes direct control of the technological choices of industrial actors7.

The justification for this control is based on the idea that the market would not be able to anticipate or integrate certain problems. Far be it from us to categorically reject this justification. It is quite clear that in some cases, the decision-making horizon of private players is not sufficient to make the investments necessary for the development of breakthrough technologies. State control of industrial affairs can be a form of productive socialism.

The energy transition agenda since at least the Brundtland report is also basically based on a socialist approach to economic problems. Is this socialism, however, a productive socialism?

By the way, I am actually a socialist. Just not the kind that shifts resources from most productive to least productive, pretending to do good, while actually causing harm. True socialism seeks greatest good for all.

Insofar as the energy transition is experienced by industrial actors only as a cost of doing business, it is a non-productive socialism, at least from a strictly industrial point of view. Insofar as, on the contrary, it opens up a field of industrial opportunities, as in the case of players such as Tesla or Air Liquide, it is part of productive socialism. In fact, the question of how to qualify current environmental socialism does not admit of a simple and categorical answer.

It is therefore not a question of saying that the political decision-making process is doomed to failure in the field of technology. However, a critical analysis of the technological choices made by political actors must generally bear in mind the following three negative features.

2.1. Risk of error in the choice of technology

The first flaw is that the public authority is not immune from the risk of making a mistake in its choice of technology. The real difference with other actors may lie in the scale of the consequences of mistakes.

2.2. Risk of error in industrial timing

The second flaw lies in the fact that even if the state is not wrong in its choice of technology, it can be wrong in the timing of the technology. Take the specific case of the electric vehicle: it is quite possible that the technology is not mature enough to allow manufacturers to put models on the market without losing money.

The third and final flaw concerns the difficulty for the industrial system to correct errors resulting from political decisions8. As soon as a technological choice becomes political, any search for alternative solutions becomes more costly and difficult, if not impossible. This blockage of technological exploration can have positive consequences, by reducing the level of uncertainty in the system and promoting trust and coordination between actors. But it can also lead to wait-and-see strategies and even upset the industrial judgement of the players.

It is appropriate to recall here some obvious points. When a private player makes the wrong technology, he runs the risk of losing a market. A famous case is that of the Kodak company. On the other hand, the preoccupation of political decision-makers tends by nature to be elsewhere: it is either to get elected, or to make a career in a system sheltered, or believing itself sheltered, from the market. These conditions are objectively unfavourable to correcting mistakes and learning, two essential assets for entrepreneurship.

Moreover, a private actor’s mistake can be isolated: competing companies are not obliged to make mistakes too. The chances that at least one player will not make a mistake are actually higher in a competitive system.

2.4. Conclusion of the second part

These three factors (technological error, timing error, rigidity) induce the risk that the levers of action of the dominant energy transition model are partly ineffective. But ineffective in relation to what? Didn’t we rule out the solutions provided by the market from the outset? In fact, we will see that we have not.

3. A new technological strategy, based on a market approach

It is not a question of advocating any inherent superiority of the market system, as if the market system could function outside of other socio-political institutions. Our objective is limited to enriching the current dominant model of energy transition by proposing a new lever for systemic action exploiting existing markets.

3.1 Hypothesis on the profit structure of the oil sector

The main problem with alternative green technologies (mentioned in 1.1.) is their lack of economic competitiveness. Technologically, they are competitive.

This lack of economic competitiveness is largely due to the fact that the price of oil is structurally low. The question then arises as to how the oil sector manages to be profitable. The answer to this question is, on the one hand, that this sector is optimised to produce on a large scale with low margins; and that, on the other hand, petrochemical activities, which use a small volume share of oil, are highly profitable: our hypothesis is that these activities account for between 25% and 50% of the profits of the oil sector. This situation is in fact a house of cards. 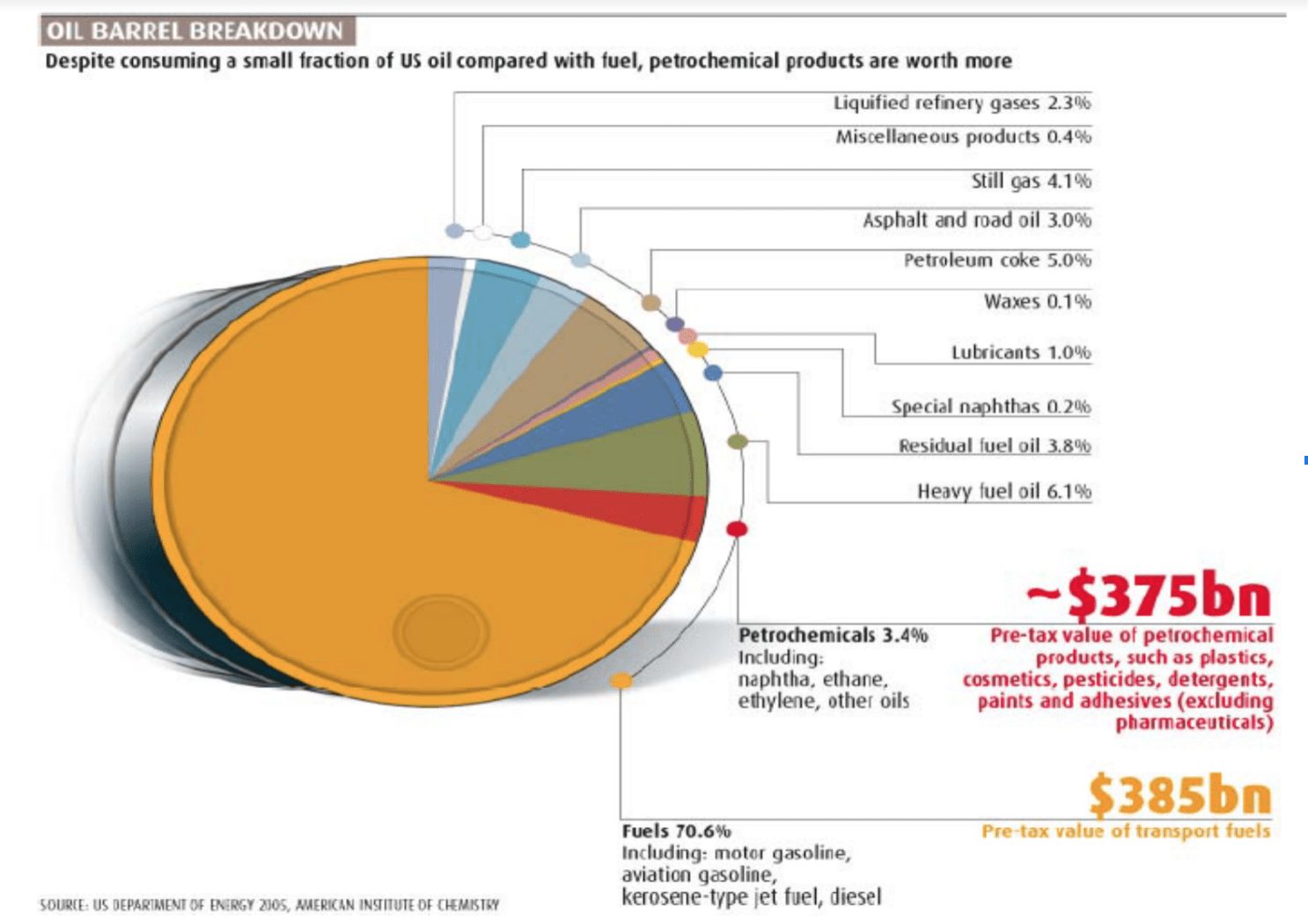 The above data is from 2005, and we know that the sector has undergone many changes, and still experiences strong regional differences. But we think it is reasonable to assume for petrochemicals a share of profits between 25% and 50%.

In this case, all other things being equal, there would be downward pressure on the prices of products that have so far been produced exclusively from petrochemicals. The negative impact on profits in the oil sector would be immediate, with the result that the price of oil would rise structurally to compensate for this loss. Such a structural increase in the price of oil would be exactly what alternative green technologies need to become economically competitive.

3.3. What technology should be selected to implement this new strategy?

Technologies close to maturity capable of competing with petrochemicals exist and are set to develop, notably thanks to progress in synthetic biology. Pressans is in a position to assist you in obtaining an exhaustive and reliable state of the art on the question of technologies that could soon disrupt petrochemicals.

The new strategy we are proposing is characterized by the fact that it exploits the realities of the existing market. It certainly deserves to be discussed, refined and enriched. The current uncertain economic times are conducive to the design of bold industrial strategies.