A Sage of innovation visits Paris 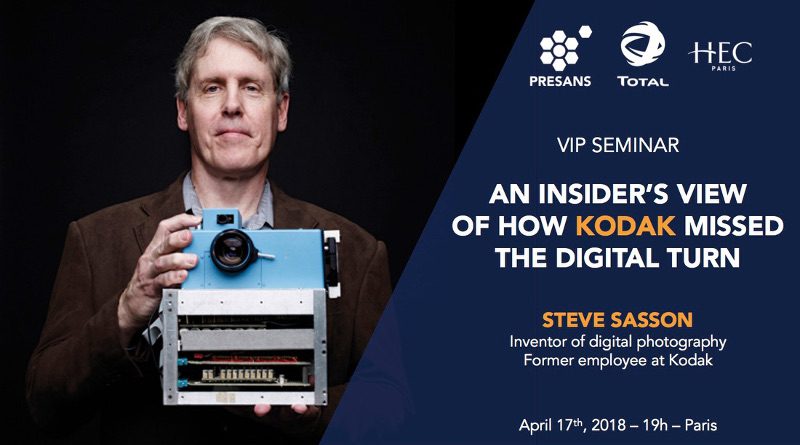 As announced, Steve Sasson has come. He saw Paris. And he conquered an audience at an event co-hosted by Presans, Total and HEC.

In his introduction, Albert Meige, CEO and founder of Presans and Academic Director of the Digital Transformation program at HEC, explains that his interest in Steve Sasson is rooted in his passion for photography. When he wrote Innovation Intelligence in 2015, the name of Steve Sasson appears in the crucial chapter 3 of the book.

The event takes place at Total Booster, a fab lab nestled in the heart of the fourth largest oil group in the world at La Défense. It is striking to observe that to become the leader in responsible energy, Total has opted for the opening of its organization: openness to other businesses, ecosystems and talents on demand. A place dedicated to the exploration of new modes and rhythms of work, the Total Booster is also open to fertile questioning – a detail that is not trivial in such a prosperous and formidable group.

What if Total was the Kodak of energy? Unthinkable?

For a century, Kodak held an absolutely dominant position in the field of photography. The genius of Kodak was first of all to have invented the flexible film, which made possible the cameras easy to transport. The second stroke of genius was to separate the photo taking from the development of images: you press the button, we take care of the rest. These two technological innovations allowed nothing less than the democratization of photography. For a long time they sheltered an extremely profitable economic model, around which a corporate culture was developed, where priority was given to the excellence of the quality of images, new products, consumables and production processes.

It was in this dream business, in 1975, that Steve Sasson had the idea of digital photography. He quickly pulled out a prototype, then a technical report and finally a patent.

For a long time it was this patent that would provide the only public index of Kodak’s activities in the field of digital photography (it would prove to be highly valuable later). Steve Sasson continued his R & D work on digital photography, but for a long time did not find any interest in business divisions. It was not until the end of the 1980s that the first product arrived: the SV9600 transceiver station, which allowed CBS journalists to send images of events in China during the 1989 unrest to the United States. to be confiscated).

The story obviously does not stop there. We will soon be posting a video of Steve Sasson’s intervention, followed by a stimulating exchange with the audience. Opinions are shared on what Kodak could have done better, but there is consensus around the critical importance of the degree of compatibility between a given technological innovation and the economic and cultural model of a company.

Thank you so much #Steve Sasson for your inspiring talk tonight about #disruption #kodak. A great moment of #innovation shared with @total teams @TotalBooster with our partners @presans @HECParis #transformation pic.twitter.com/O4jP8Shmf7

Download chapter 3 of Innovation Intelligence: Knowledge, the fuel of innovation – Steve Sasson, Alan Turing, or Rudolf Diesel will give you the key to risk management in a world punctuated by innovation cycles!