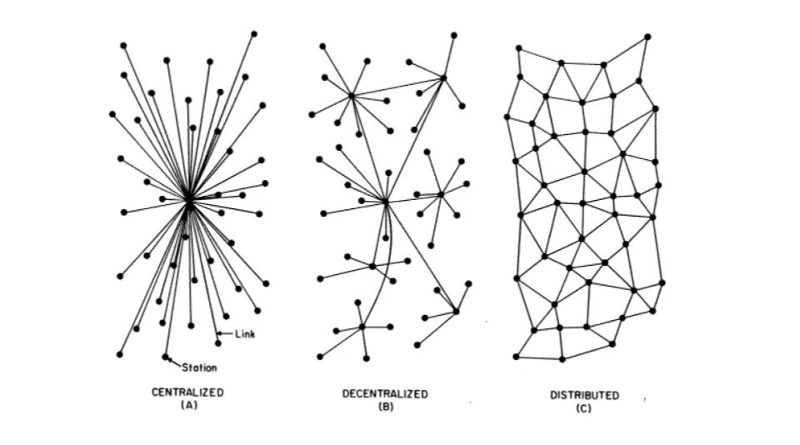 This technological review on the decentralized web summarizes some facts deemed significant by our Fellows as part of the Presans Platform activity.

1. What is the decentralized web?

ARPANET, the ancestor of the Internet, appeared in 1969. Designed to be able to continue to operate in the event of nuclear war, its architecture is decentralized: its protocol makes interoperable different systems and the operation of the network does not rely on a central computer.

The use of the Internet is for a long time exclusively military and academic. The centralization of the network around some computers began around the beginning of the 1990s, with the emergence of commercial users, providers of Internet access for a wider audience. By the mid-2000s, new platforms were shaping Web 2.0, which makes it easier for users to produce content and deploy it on new media such as mobile devices or tablets. These platforms also allow the application developer ecosystem to find a new lease of life by turning infrastructure investment costs into variable costs of using a cloud service (stack). This evolution accentuates the centralization of the Internet around some giant computers.

Centralization presents users with advantages as well as defects. Side benefits: the economies of scale make possible a great efficiency and simplicity of use. Side defects: massive access to data in case of hacking, unsatisfactory control of personal data monetized by the platforms, tenuous protection of privacy, freedom of expression subject to a framework of dubious legitimacy, lack of network memory with the loss continuous pages or versions of pages, vulnerability to the destabilizing influence of occult actors.

These defects give rise to two types of discussion, one political, the other technological. The political debate on the appropriateness of state intervention to regulate large platforms by assimilating them or transforming them into utilities does not concern us here. Let us note nevertheless the appearance of new tax provisions targeting the big digital platforms in countries like France.

What would a decentralized web be? In terms of architecture, a network in which the weight of computers would be more uniform. From the point of view of the users and the applications: a web where the user would control his data, the protection of his private life, and the exercise of his freedom of expression. In addition, the decentralized web also includes the idea of decentralized payment instruments, and more generally of decentralized remuneration instruments carrying new forms of work organization.

2. The challenge of decentralization

The technological theme of the decentralized web is vast and encompasses a host of rather heterogeneous approaches. In addition, each approach is driven by a set of distinct motivations. Note, for example, that Bitcoin’s decentralization is subordinated to the objective of building a stable currency.

Some of these decentralizing approaches have already relatively long history, starting with peer-to-peer sharing. Other approaches are more recent and speculative, like the blockchain.

A significant trend can, however, be identified within this set: the search for immutability, in the sense that a decentralized web object cannot be unilaterally deleted or altered by a central platform.

It is in this sense that we must understand the notion of trust, often put forward to defend decentralization. The proper functioning of a centralized network relies on trust. The argument of the decentralizers consists in putting this confidence in question and proposing architectures and governances that minimize the need for trust towards centers. The challenge of decentralization is to operate in the absence of trust in a centralized trusting third party.

In this sense, the different technological bricks of decentralization can be understood as different strategies to achieve the immutability of digital objects.

The maturity reached by cryptography is at the root of all the other developments mentioned here. Cryptography gives a new basis to the notion of property in the digital space: what belongs to me is what I have the key to.

A mature technological brick is a peer to peer sharing. However, the generalization of this technology is unprecedented.

The blockchain is the most famous technological brick associated with decentralization.

A technological brick that is less apparent but nevertheless very present in decentralization projects is functional programming, both as a programming style and through a variety of languages that have emerged from the academic world to highlight their strengths.

The DAO, or autonomous distributed organization, is an idea explored by various projects which for the moment remains speculative and exists only in the form of white paper.

These examples do not exhaust the list of plans for decentralizing the decentralization of the Internet, some of which are extremely esoteric. But all projects, even the most incomprehensible, fundamentally aimed at the realization of an immutable system in the sense defined above.

The best-known actor of the decentralization of the web remains today the ecosystem around Bitcoin.

In recent years, the reflection around the decentralized web is structured around an event driven by the Internet Archive,

The most esoteric decentralized web startup is undoubtedly Urbit.

The re-decentralization of the Internet is likely to upset the dominant business models based on advertisements.

The highly speculative character, both from an intellectual and financial point of view, of decentralization projects, should not make us forget that economies of scale tend naturally to give rise to phenomena of centralization and that these phenomena correspond to rationality. economic.

Thus the Bitcoins miners’ landscape is now very concentrated, and a majority of users go through platforms. The economic rationality of the blockchain is discussed, as is the energy footprint of Bitcoin.

The challenge of decentralization is therefore to propose an architecture that is both capable of sustainably defeating this natural tendency and likely to be economically viable.

From an ethical point of view, the protection of identity that would be promoted by the re-decentralization of the web would at the same time promote criminal activity.

Last consequence of ethical order: immutability also implies the irrevocability of objects, incompatible with the right to forget claimed by Europeans. Decentralization cannot be reduced to technical choices.