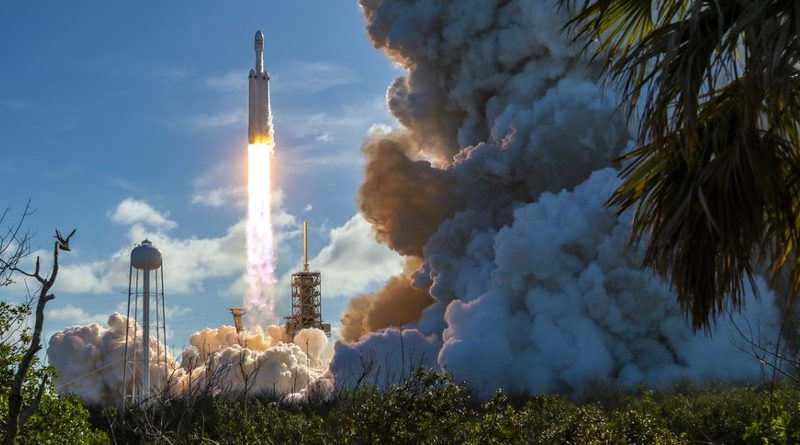 Is space conquest a vain project? Some people think so. SpaceX (Space Exploration Technologies Corp.) is no exception to companies that face this type of negative reaction.

The recent dispatch of a Falcon Heavy rocket, which launched into space a Starman piloting a Tesla Roadster (in a nod to David Bowie’s Space Oddity), may not have mitigated this hostile perception.

It is difficult, however, to deny the effectiveness of the communications of Elon Musk.

It’s also hard to deny that SpaceX employees do not see their work as being pointless or in vain. They do not feel the feeling, so common today, that they work in a “bullshit job”. Are they crazy?

To answer this question, I would like to show that Elon Musk’s so-called delusions stem from an implacable logic :

1. The necessity of the optical factor

Elon Musk understood that to make his businesses successful, it was essential to make their mission cool. To design not only beautiful rockets but also beautiful spacesuits.

Elon Musk understood that it was necessary to put S.E.X. in space: simplicity, efficiency, sexitude (© Albert Meige). Because Elon Musk is a great seller. A salesman who does not present himself as a salesman and who does not just sell a product.

The contracts between SpaceX and NASA are worth billions of dollars. One of these contracts concerns the replacement of the Space Shuttle’s 2011 program, with a new shuttle designed by SpaceX. To achieve this, Musk has focused his talent as a seller on the political inertia of members of Congress. In concrete terms, this meant replacing 500,000 jobs across 50 states with a California site employing 3,000 people.

The idea that a space program is not a real need has become a dominant idea. This is a self-fulfilling idea: indeed, in these conditions and in a democracy, a space program is not self-evident. It is in this sense that Musk conceived the mission of SpaceX on a different plane from that of Tesla. Tesla accelerates an otherwise unavoidable technology. SpaceX is carrying out a mission that no one else would otherwise realize. And to achieve this mission, SpaceX must forget the negative image of space conquest. SpaceX cannot exist in a world where everyone would agree that space conquest is a vain project, just another “bullshit job”.

To attract the best engineers, to make the most of their commitment, SpaceX must absolutely give a positive, attractive image of the space conquest. This is not an option. The weight of communication and design is not an accident at SpaceX. The madness of Elon Musk is a strategic imperative.

2. The technological race is launched

In reality, the return of the rivalry around the space conquest is not accidental. If Musk has managed to convince politicians to give up the federal funds that fed jobs into their states, it is for one very specific reason: to put an end to a situation that has become humiliating for the world’s leading power.

Indeed, the retirement of Space Shuttle has resulted in a Russian domination of the transport of crews for the International Space Station (ISS). Only Soyuz shuttles could perform crew rotations, at a price per seat of $ 70 million.

This concrete case can be generalized. The engine of the space conquest is the same as that of development and investment in all strategic infrastructures. The economy carried by the Internet is itself carried by submarine cables and satellite constellations, etc. In a word: there is no sovereignty without control of geostrategic assets.

The recent report of the Foundation Montaigne by Arthur Sauzay, Espace: Europe contre-attaque, sketches a very evocative picture of the current situation. 2018 and the next few years will be decisive for the future of the European space industry.

The vision of the future of American entrepreneurs’ space program is based on the idea that the conquest of space must fundamentally self-finance. The circulation of concrete and precise plans for the transformation of the so-called lunar space into an economically profitable system must be taken seriously.

It is also necessary to question the significance of the public rejection that this type of project typically generates in Europe, and particularly in France.

At least it is encouraging to see the emergence in France of actors who break with this common tone skepticism. The Sauzay report invites experts to seriously consider reusable launchers, one of the critical points of SpaceX’s strategy.

3. A scalable organization because open

The technological optimism of the 1950s was based on the impressive innovations of the Second World War: radar, computers, long-range rockets, jet aircraft, atomic bombs. This optimism carried with it an organizational ingredient that gave pride of place to centralized planning. This planning worked remarkably well when the objective to be reached was limited, for example: to put astronauts on the Moon. Subsequently, narrow goals disappeared and organizational performance deteriorated. The space program was massively bureaucratized. The disaster of the rocket Challenger can be considered as the result of this trend.

Elon Musk is known for his hostility to processes. He leads an unrelenting struggle against bureaucratization, against proliferating and pernicious jargon, and against slowness. He is constantly thinking of one thing: SpaceX’s ability to grow and integrate new people without losing organizational efficiency, while minimizing the weight and opacity of the past.

SpaceX is basically a company organized around a narrow objective: to go to Mars. Certainly, the inspiring mission is to save humanity. But the goal is precise and narrow, and that’s what makes all the difference.

SpaceX is a company that is organized to be open and attractive, as anti-bureaucratic as possible.

Let’s move SpaceX to the sieve of the open organization to clarify our argument:

— Mars and Space as ultimate platforms: new development infrastructure, a center of new economic flows, access to an audience with unique characteristics.

— SpaceX sells flights and not launchers. The sector already has a strong functional orientation.

— Highly integrated production, a strong preference for internalization: a choice that breaks with established industry practices.

— Not everything is internalized.

— To ensure the long-term survival of humanity by colonizing space.

Plan yes, bureaucratize, no: this is the open organization of SpaceX.

Everyone is crazy in this story. But SpaceX is less mad than its detractors, who are unable to contemplate the possibility that the Earth cannot be saved. Moreover, Musk is much more strategic with his madness.

As for established actors, it is not the layers of bureaucracy accumulated over time that will protect them from the irruption of new actors.