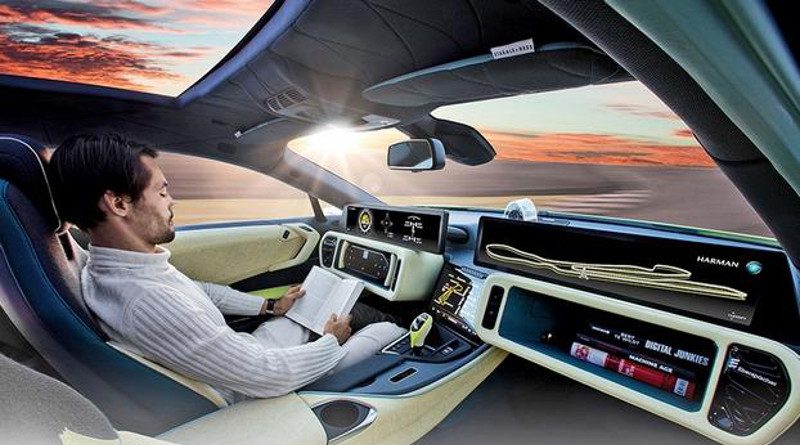 This note on autonomous vehicles summarizes some facts deemed significant by our fellows in the context of the Presans Platform activity.

1. What is the autonomous vehicle?

The autonomous vehicle is part of a group of evolutions resulting from the integration of new technologies derived from electronics communication Computer science artificial intelligence within transport systems.

Characterizing the economist vehicle is currently hampered by the fact that it’s evolution has not yet stabilized.

A 100% autonomous vehicle refers to a vehicle entirely driven by an artificial intelligence. It is able to to steer itself on its own and interact with its environment so as to adapt its driving according to the situation. It is capable of moving from a starting to a finishing point without any human intervention.

No current version elite Automobile domain it’s fully autonomous in all real-world scenarios. Car series are progressively integrating the technology and apparatuses for driving assistance. These still require human intervention but given a foretaste of an autonomous vehicle. Tasks that can be delegated to the machine are for instance speed regulation, emergency braking, maintenance of the trajectory, parking the vehicle, and slow driving in traffic. The driver can and must, due to regulation, be able to take over “at any moment” .

An international standard has been defined for motor vehicles by the SAE. It sets six levels of automation, from 0 to 5. Level 0 corresponds to a traditional vehicle, whithout any automation. Level 5 corresponds to a fully automated, driverless vehicle, without any pedals or steering wheel. Levels 1-4 gradually integrate Advanced Driver Assistance Systems (ADAS) as well as information and handover systems during when driving is delegated to the driver.

From the legislative point of view, the critical transition is located in level 3, where the permanent driver is kept: he must be able to take back the main “never”. The point of the division of roles between man and machine, especially in terms of the man-machine interface.

At level 4, the driving is automatic in specific situations piloted without needing driver control or recovery by the driver.

The first brick consists of the set of sensors and cameras placed around the vehicle to measure, understand and interpret the vehicle’s material, visual, and dynamic environment. The observed phenomenon include signals from the visual spectrum (including infrared) and ultrasound. This layer of sensors is completed by a later of exogenous information transducers as specified by V2X type communication protocols.

The second brick is that of the processors allowing for real-time analysis of the data captured by the sensors, so as to produce a representation of the environment allowing for realtime intervention decisions for the analysis of the data provided by the sensors, in order to produce a representation on the longitudinal and lateral behaviours of the vehicle. The real-time requirement leads to the development of extremely sophisticated in the electronics and computer architectures. The issue of nonvisual, complementary and information, at the vehicle should be able to receive from its exterior environment (including other vehicles, infrastructure, or even pedestrians) is currently unsolved.

The third brick is concerned with the man-machine interface. Its imposed performance is very sensitive to the desired level of autonomy and requires various psycho-sensory technologies: visual, acoustic, haptic, vibratory etc. The interface must optimise cognitive ergonomics and minimize the mental burden of the driver, especially at level 3 autonomy.

The fourth technological brick is that of the interior design, of which level 4 and 5 autonomy lead to a complete review, taking into account new issues of comfort as well as innovative uses of the new time made available.

The landscape of the autonomous vehicle players evolves rapidly with partnerships, projects and market positionings.

Car manufacturers: all major manufacturers, such as GM, Ford, Toyota, Renault, PSA, Volvo, BMW, … but also new manufacturers like Tesla, which combines electric and autonomous vehicle. These players invest in internal R & D and buy specialized startups. They are partners on some common projects. Manufacturers of industrial vehicles also invest in their specific applications (platooning, access to logistics platforms).

Equipment Manufacturers: Bosch, Faurecia, Valeo, Continental, which focus a lot of innovation and technology on embedded vehicle systems, on electronics, localization, and interiors. They develop some of the technological bricks of the autonomous car and have industrial processes for mass production accessible neither to startups nor to digital giants.

The digital giants: Google, Apple, Baidu and others. They focus on the mass analysis of data, the retrieval of information and the use of this information to establish autonomous vehicle strategies, with vehicle tests, operating systems, user interfaces, connected services and the development of service platforms.

In this set, Tesla’s visibility is undeniable, especially since the first fatal accident occurred in 2016 in open road aboard a Tesla car traveling in autonomous AutoPilot mode. Other fatal accidents have occurred since then, also involving other manufacturers.

Such an accident seems to contradict the primary purpose of the autonomous vehicle, which lies in the improvement of road safety. It is estimated that 80% of road accidents are caused in part or completely by drivers.

The behavior of the autonomous vehicle must obey clear and comprehensible principles derived from a robust ethic. Fatal accidents related to current experiments highlight this problem, especially since these experiments are subject to restrictive conditions, and generally involve trained professionals. Authorizations to conduct experiments are issued at the state level. In the USA, each state enacts its rules. Europe has formulated its own autonomous vehicle licensing rules, which are also issued at the state level. In China or in some cities there are local regulations, provisional, allowing to leave the experiment to experiment subject to conditions: the vehicle must be supervised by an operator who can regain control quickly … But what does “quickly” mean? The question is open. Drivers can exhibit a wide variety of behaviors in this type of situation, with great differences in driver performance, timing, and driving environment.

An ethical question arises when the vehicle must decide in the event of an unavoidable accident how to minimize its consequences. Decisions of this type may relate to the death of vehicle passengers.

The first tests of personal cars and trucks were made in the early 2000s. The Google Cars began circulating in 2009. In France, Renault and PSA introduced since 2015 several prototypes of cars that circulate in a partially autonomous mode. A vehicle equipped by Valeo has circulated on the Boulevard Périphérique in Paris. The Renault vehicle crossed the Place de l’Étoile to test the conditions of autonomy in a difficult environment. There are Volvo experiments in Gothenburg, Uber in the USA. California and China are two particularly active areas.

We are starting today to have a set of experimental vehicles that circulate with feedback and in particular the analysis of potential incidents that may occur, to better identify technological and situational problems, and to build scenarios of critical situations. .

Specialized vehicles (such as autonomous Navya or EasyMile shuttles) are running on some public sites. But the entry into circulation of these vehicles on open road is now prohibited by the Vienna Convention, which requires the presence of a master driver in his vehicle. Experiments deviate from this rule and can only be carried out under conditions of agreement on a case-by-case basis with the authorities, which issue revolving licenses.

Another problem that has emerged with the increasing complexity of embedded systems is that of cybercrime.

International working groups are responsible for thinking about legal issues, such as liability in the event of an accident: how to apprehend and decompose or distribute it, between the manufacturer, the equipment manufacturer (s), the actors (user, supervisor, infrastructure manager …) involved in the interaction between the vehicle, its occupants, its environment? The question remains open and is not the subject of consensus on the part of insurance companies. A manufacturer such as Volvo stands out by announcing that accidents involving its autonomous vehicles would be fully supported by their manufacturer. Until what point ?