Raout Talks 2016: disruption across the spectrum 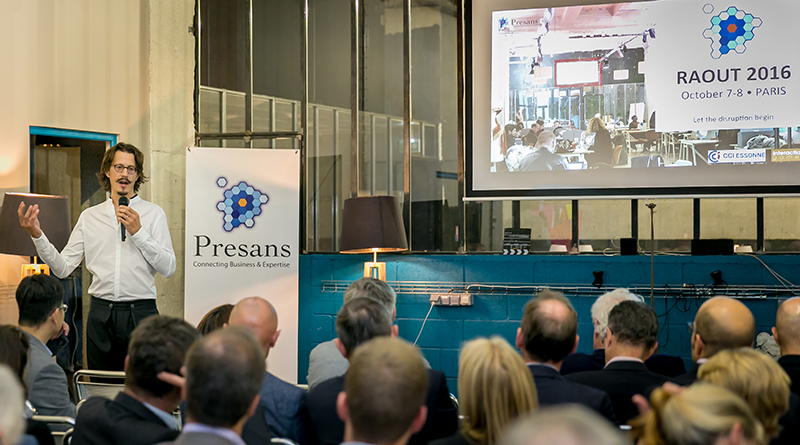 People like to celebrate the tradition they are a part of, even innovators. But they also like realtalk — especially innovators, the builders of new realities.

The theme of the evening was disruption. You’ve heard of disruption, of course. You may even have read about it on this blog. The noise around this word is impossible to escape. But so is the core of reality that it captures. This duality was quite familiar to the Raout audience. All those that were present are industrial innovators, many among them clients of Presans. That is something we’re proud of.

We picked this theme because we knew there was depth behind the noise. In order to uncover this depth, we gave it the Presans treatment. We expanded the range of perspectives from which the problem is approached. The industrial perspective was essential, yes, but so were the educational and political dimensions. We brought in three corresponding real experts with deep, experience-based knowledge of the issues. And in turn, each of these experts brought his distinct style and personality to the discussion. Disruption in Education: MOOCs are books!

First up was Frank Debouck, Director of the École Centrale de Lyon, a veteran entrepreneur with numerous lateral operational endeavors, whose early career roots lie with Air France and the Concorde aircraft. The school he now runs is his alma mater, and his talk centered on the lines of permanence that underlie the field of higher education, as exposed to disruption as this field may be. He told us that despite widespread adoption by students and teachers of digital technologies, the most popular course was taught chalk stick in hand by Grégory Vial in mathematics. He discussed the drivers of learning: the need to have dreams, the need to have enthusiasm, the ability to cope with distractions. He then focused on the content of learning and emphasized the fact that books aren’t enough to teach how to become an engineer outside of software development, and that MOOCs are essentially books. Soft skills as well as the ability to judge situations are learned the same was as before. At the same time, he stressed both the importance of acquiring a strong understanding of scientific fundamentals, and the nobility of the art of sales — two things Elon Musk would without doubt agree with. Some questions remain hard to solve. Is it possible to teach students to come up with ideas like the Swatch Black & White kit, or to invert ostentatious Christmas trees in fancy restaurants in order to make room for customers? Is there an alternative to grades? Finally, Frank expressed his commitment to expanding the international horizon of his students, to preserve the standards of the high-school curriculum in France, and to teach engineers more about the changing geopolitical and political world they live in. Disruption in politics: the disintegration of the Eurozone

Next came Charles Gave, on whom we recently wrote an article. He expressed his agreement with Frank Debouck on the importance of sales and the customer, connecting this mindset with the distinction that lies between prediction-based planning and entrepreneurial adaptation to an uncertain environment. According to him, the field of politics is ripe for disruption on a global scale, because since the start of modern capitalism, political institutions have obeyed a cycle in which they hollow themselves out over the course of three generations, approximately 70 years, and because we happen to find ourselves in the implosion phase of this cycle since 1990: by 2020, the world is likely to be unrecognizable to someone who’d have fallen asleep in 1990. And the implosion is now accelerating. Negative interest rates suggest policies are based on magical thinking. The end of US hegemony could see unexpected geopolitical shifts on the Eurasian continent. Finally, the according to Charles Gave flawed monetary system based on the Euro will disintegrate. In order to avoid violent upheavals, he suggested six political measures aimed at restoring the system’s ability to function and meet challenges, among which the transformation of the higher education system: an area in which he is personally active. Disruption in the industry: industrial Internet will dwarf consumer Internet!

It was now Vincent Champain’s turn to talk. He is the General Manager of the GE EU Digital Foundry, located in the heart of Paris. We wrote a post on the GE digital strategy a couple of months ago. Vincent Champain opened his talk by underscoring the speed at which the world is changing through digital technology. Such changes have a sociopolitical impacts, but they also affect the world of industry, a fact serial disruptor and industrial titan GE has seized upon. The Internet of Things (IoT) revolution is a silent revolution, in which the winners will be those players who master the challenges of speed, volume and complexity presented by data. In 2017, the number of connected objects will surpass that of human beings on the planet. The market size of the industrial Internet is set to dwarf that of the consumer Internet, and at the same time the number of people capable of exploiting the opportunities of the IoT is relatively low. In the world of industry, the goal is to maximize equipment performance, to increase the efficiency of operational systems, and to optimize product life-cycles. The low cost of sensors makes it affordable to record a vast amount of data relative to the performance of machines. Optimizations then produce percentage-wise small gains, but these then make all the competitive difference. These optimizations are distributed according to a power law, with a long tail of modest improvements. Data scientists are searching for the needle in the data haystack, which can then be turned into an easily scalable cloud application. Vincent Champain illustrated this point with a cloud application of his own to collect keywords from the audience. The profile of data scientists combines theoretical excellence and industrial experience. Web data scientists usually don’t cut in this field because of the complexity of the machines involved. Vincent Champain is currently in the process of hiring 150 of them. He views the Foundry as part of an ecosystem of partner institutions. In his closing remarks, he reminded us that machines will not replace the need for human judgment.

Topics during the Q&A included driverless cars, enhanced humans, risk management, and the difference between the speed of technology and our ability to dream about the future, among other themes!