What you thought of DYSTOPIA 2019 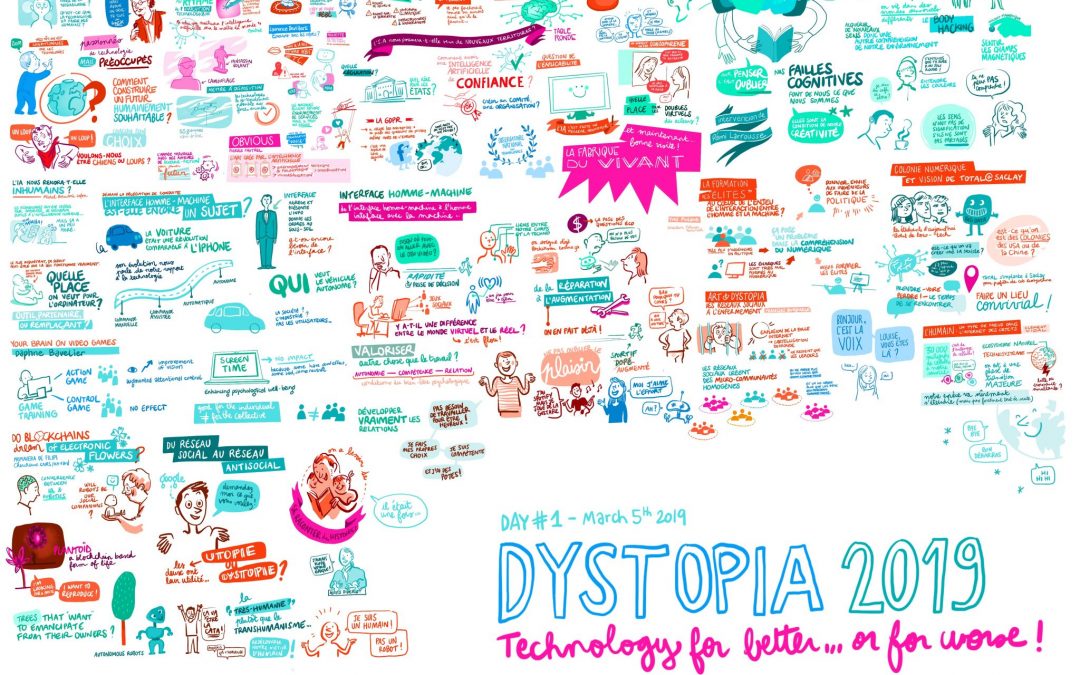 1. The first strong impression left by DYSTOPIA is that the room was full during the entire day, proving this event has found its audience. An audience essentially made up of decision-makers from the industrial world, open to surprises, seduced by the idea of approaching current technological themes from a dystopian angle.

The testimonies we have received confirm this impression:

“Far removed from innovation fads, breaking conventions, re-framing, stepping aside from and not necessarily returning to the initial trajectory…”

“The world that is being prepared is one full of dangers and hopes.”

“Are we ready to live with all the technological advances that we adopt little by little?”

2. DYSTOPIA was at full capacity for a whole day above all thanks to the excellent level and the original list composition of the twenty speakers that were on the bill. A result obtained thanks to the know-how of PRESANS when it comes to mobilizing scientific and technological expertise on demand.

“Very interesting with speakers from all walks of life.”

“An event full of good energy.”

“Finally, an opportunity to reflect upon the impact of technology on life and society, it is rare enough to be put forward more”

“Thinking outside the box, expanding the way we think.”

“A rewarding day, a high-quality reflection on the contribution of innovation to serving of the common good.”

3. This is also a matter of rhythm and format variety. What keeps the energy level of 220 people high over the course of ten-plus hours is DYSTOPIA’s unique mix of tenseness and relaxation. The tension is there to ensure that everything goes exactly not as planned. Incursions of the unexpected are part of the show: this is a defining trait of DYSTOPIA, a mark of the spirit of freedom that guides this event.

DYSTOPIA seeks to spark the spirit of freedom

4. A spirit of freedom to free us from what exactly, if not having to carry the weight of a certain dominant, conformist optimism? Not in order to indulge in a vain posture of defiance, but to rebuild or create relations, to regenerate the feeling of being part of the human adventure.

5. This human adventure is, at the least, an individual, political and anthropological adventure:

6. The main theme of DYSTOPIA 2019 focused on the interactions and convergences between humans and technology, using industrial, philosophical, artistic, scientific exploration angles. Quite remarkably, it was an intervention about a new artistic domain that sparked the most questions from the public: does a work generated by an algorithm count as art? A question raised by a concrete object, located on a complex boundary whose exploration is still ongoing … This frontier experience stood actually at the heart of each and every talk at DYSTOPIA 2019. Sometimes in a visually dramatic way, as when a military drone appeared during the intervention of Emmanuel Chiva, Director of the Agency for Defense Innovation. Sometimes entirely on the strength of the experience and self-examination of existence, as in the talk of François Bourdoncle, co-founder and former CEO of Exalead.

7. At the political level, DYSTOPIA has contributed to the emergence of new perspectives for a still incredulous, and yet slightly reinvigorated Europe confronted by the return of History. The question of our day is how Europeans intend to position themselves vis-à-vis the great global powers, who appear to be evolving towards sometimes strangely similar techno-political configurations.

8. In this new age of drones, flying or other, it is OK to be pessimistic… by which I don’t mean a rebirth of the tragic spirit, let us not lie to ourselves about who we are… but pessimism has for us a heuristic virtue, that is to say that it is a method of thought which should be judged by its fecundity and by the increased mobility which it confers on intelligence. DYSTOPIA transforms pessimism into high emotional energy.

9. But there is more surprising than this combination of pessimism and constructive energy, that was almost palpable during the exchanges… the current wavering of technological and political narratives corresponds to a moment of doubt. The temptation to artificially suppress any expression of this doubt would be an intolerable straitjacket for the mind, making any adaptation to reality impossible. Doubt is healthy. The exercise of pessimism and doubt plays a vital role in the distributed intelligence of a society of which everyone ultimately shares the collective destiny.

10. Distributed intelligence means meeting lots of people. Not as elementary particles colliding into each other, but as individuals forming links based on a shared positive vibe. The immersion in the cold bath of dystopian themes releases new energy. The dark or strange scenarios of a world bereft of humanity reveal the value of the human. And this energy and this consciousness of the human will be indispensable to build together a humanly desirable future. What will we do with new technologies … what will they do with us? The collective energy generated by DYSTOPIA 2019 came from asking hard questions in a spectacular, speculative, empirical, personal, theatrical and musical way – making this questioning an act of freedom.

← Why DYSTOPIA Faurecia : in search of unalterable beauty →