Is Buffer an Example of the Company of the Future? 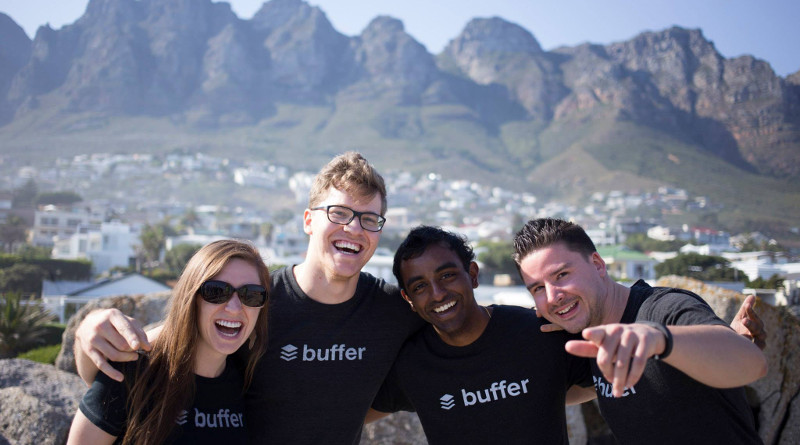 In a previous article extracted from his co-authored book Innovation Intelligence, Albert Meige talked about the mega trends in employment and work organization. Among these mega trends, he mentioned flexibility in terms of both time and space in the future work organizations.

Well, it seems that at least one company is already in the future. Let’s talk about Buffer !

Buffer is a software application that allows its users to manage accounts in social networks. The most interesting feature of the application is that it gives the possibility for users to schedule posts to Twitter, Facebook, Linkedin, Instagram, Pinterest and Google+. The company was created back in 2010 by Joel Gascoigne (CEO) and Leo Widrich (COO) in the UK. The two co-founders quickly moved to San Francisco after launching the startup. As of March 2017, Buffer is a team of 78 people working from all over the world.

Buffer is very interesting as it illustrates how flexible and open a startup can be nowadays, and how it looks totally different from traditional companies…

Have you ever dreamed to reconcile your career and your desire to explore the world ? The following may interest you…

The first originality in Buffer’s organization is what they call themselves their “fully distributed team”. In fact, Buffer has almost 80 employees but yet no physical office anywhere. Why and how do they work together being at different places ? One of Buffer’s values : Live smarter, not harder

At the end of 2012, realizing that software tools allowed his company to run that way, Joel Gascoigne decided to make his team fully distributed. Of course, he was aware of the challenges that decision could bring : difficulties in management, organization of projects, not actually knowing the colleagues… But this fundamental part of Buffer’s identity is still there four years later.

In a 2014 blogpost, the CEO listed the advantages of this organization. For him, it provides super-productive employees to the startup and the coverage of a lot of time zones, as well as providing a great amount of freedom to the workforce. It allows people to work from wherever they want and travel as much as they desire. Major advantages that easily outweigh the downsides, according to him !

I am happy to report that I am in love with the choice we made to be distributed all across the world (Joel Gascoigne, CEO)

In order to know each other better, Buffer organizes a few “retreats” each year, in which all employees physically meet somewhere in the world (with all the expenses covered by the company) for a week and work together.

This interesting move is fueling the digital nomad movement. Digital nomads are people working while traveling, as their work only requires a laptop and a reliable Internet connexion. Until now, the vast majority of them were self-employed. But if more companies adopt a Buffer-like management approach, this movement could move from marginal to quite significant in a few years !

Task forces instead of teams, and no managers

But Buffer is not only flexible in terms of work localization. They also adopted an original way of actually getting stuff done together. Influenced by Frédéric Laloux’s book Reinventing Organizations, they are ignoring the old paradigm of how companies should work, and embracing the new, emerging one. The task forces on a random day

Buffer decided to switch from “long-terms and static” to “shorter-term and more fluid” teams. It means that the company structure is not fixed anymore, but changes with the needs of the moment to fit perfectly to the projects they have to deal with.

A consequence of this organization is that managers are not required anymore. Inspired by the concepts of self-management and wholeness developed in Laloux’s book, the startup allows its employees to freely propose, create, and/or take part in task forces. Their job title is no longer relevant, as they participate in different projects with various roles.

Another consequence is that hierarchy has become very different from what we usually see in companies. There is still a sense of hierarchy in Buffer’s organization, but it is far from being associated with only a few persons and given forever. Instead, it appears naturally, from the way people work and are involved in a project, and it changes often, organically, as a different leader emerges while working on different tasks.

Transparency is a serious matter

The company has another interesting attribute that is quite impressive and not common : extreme transparency.

As we have just seen, they share with great openness information about their organizational practices. But the transparency is not only about the organization. It is also, for example, about the salaries. Do you want to know how much the CEO is paid ? Fine. Buffer shares a spreadsheet – open to basically anyone – in which you can see the actual salaries of each member of the team, including Joel !

And that’s not all. Wondering how much you would earn at Buffer ? The salaries are in fact determined by a formula. It is also shared with the world and anyone can check it. If you want to know your salary at Buffer, you just have to use their transparent salary calculator.

To be fair, we also have to mention their transparency towards their clients. If you are a paid user of the service, you can easily know how the money you give them is used. It’s as simple as this image. Buffer is an example among the open organizations that have been emerging during the last fifteen years. Albert Meige, in its temporary definition of Open Organizations, identifies three fundamental aspects of these organizations:

They are Digital Enabled: their operations are digitally optimized, if not entirely handled digitally.

Obviously, this is the case for Buffer, which was born in the digital with a digital-based business. But not only its business is impacted: all of the operations and team collaborations are made digitally. As a distributed team, digital tools allow members to work together while being very far from each other. More than Digital Enabled, Buffer is Digital-Born and lives digitally.

They adopt a platform strategy.

Buffer is not a platform per se, but it is a SaaS (Software as a Service) that makes the use of social media platforms easier. In a way, it is a platform of platforms.

This logic of on-demand talents is important at Buffer, although it is handled in a specific way. They hire their “employees” without having any legal presence in their countries. In most of the cases, that means that the workers have an independent status. But it is not what matters most. With their organization by task force, they engage the people belonging to the team when it is necessary, just for the time of the project, before they integrate other task forces for other projects. On-demand.

Is this how we will all work tomorrow ?

Today, everybody claims that flexibility is crucial for the future, especially for the workforce and for running businesses. But while a lot of companies are still hesitant to allow their employees to work remotely a few days per month, Buffer, as a startup company, went global and distributed almost from day one, and has a fully remote workforce.

They may just be in advance and showing the way for the future of work. It is easy to think about the disadvantages of an extreme flexibility in the labor market – Albert has pointed out its similarity with the labor organization of the XIXth Century, before the emergence of social rights – in terms of employees’ commoditization, hired on-demand and quickly fired, with no possible stability. Buffer shows us the good part of the digital revolution’s impact on the future of work : the ability to travel endlessly, good salaries, a great freedom of action, and a lot of other benefits ! Let’s hope this is the way of working that companies will adopt for the future.

It looks better than the XIXth Century factories, doesn’t it ?