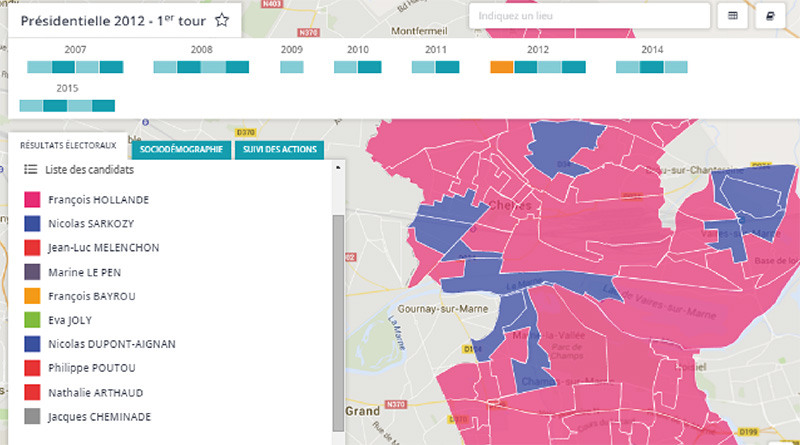 Tell us about yourself and what you do.

I’m one of the three cofounders of Liegey Muller Pons (LMP), which sounds like we came straight out of the 19th Century, but really is a startup that wants to change the way communications and opinion analysis are done in the field of politics. Our idea is that the best results in this domain are obtained by combining, on the one hand, a technology and big data focused method with, on the other hand, an approach based on human, face-to-face interactions with the people that need to be reached. Both need to be used together. We do this in the field of politics, where we gained a measure of recognition, but also in the corporate world.

The way I got into this business is that in 2008, while on an exchange program in Boston, I took part in Obama’s electoral campaign as a volunteer. Contrary to everything I had heard about the importance of social media, I spent most of the time going door to door. This seemed at first a very old-fashioned approach. But then I realized that this method was supported by a vast technological and scientific infrastructure. Experiments had shown that going from door to door was the most effective way to convince people. The geographical deployment of door to door operations was data-based.

Over there I met two other French guys. We decided it would be great to apply these methods in France. At first we did so as a side-project to our respective jobs. Two of us worked for McKinsey, the third was working on a PhD at MIT under Esther Duflo. So we thought: “Wouldn’t it be great to apply Duflo’s randomized trials method to politics?” We tested the effectiveness of various methods this way. This was an innovative approach in political science and created opportunities for us. We ran part of François Hollande’s campaign in 2012. We created our company and we are now active in all the countries of Western Europe, we work on all sorts of campaigns, big or small, left or right, using our combined arms approach.

Our specialty is to analyze all the available open data in order to predict electoral behaviors on a fine scale of resolution — as small as a building block. So we know, for any given political candidate, where he should prioritize his campaigning efforts. We also predict elections, as an alternative to surveys. Thanks to the recent open data efforts in France we can provide information on the electorate at a minuscule fraction of the cost of a corresponding survey. The information will have a greater error margin, so it would be correct to say our service is disruptive in the Clayton Christensen sense of the word.

What does it mean to be disruptive in the field of politics today?

Everybody seems to agree politics is an area ripe for disruption. Certainly politics isn’t doing too well, and not just in France : decreasing trust in institutions, decreasing political participation, loss of representativeness of political parties. What solutions do we have? First of all I think all the solutions haven’t emerged yet. And I don’t think the solution lies in a 100% social media / big data approach, certainly not in the 20 coming years. I’m not entirely convinced by what Naval Ravikant has written, because there is a major problem today with social media and politics: there are very, very few people who actually talk about politics on social networks. This means social media are a great mobilization tool for your sympathizers. Social media is indeed way more cost-effective when it comes to mobilizing people who already want to help you. Social networks are great when it comes to getting people to subscribe to your newsletter, or raising funds. However, social media has very little impact on the electoral behavior of people. One of the reasons for this is that on social networks, people adopt a very herd-like behavior. People tend to only be in contact with people who already see things their way. There is extremely little exposure to differing opinions on social networks. Studies have shown offline networks are more heterogeneous than online networks — and offline networks already tend to be strongly homogeneous. This all means that people tend to not change their opinions online. They can mobilize online, and this is observable from the Arab Spring to the Obama or Sanders campaign. But you won’t change peoples’ minds through social networks. So social networks aren’t enough, we still need old-fashioned methods such as going door to door. And to run such operations, you need political parties. Probably not parties as they exist today, because they don’t function well. But you do need infrastructures to do things offline, and what you end up with will be something like a party, or at the very least a campaign. The party / campaign distinction is very important in the USA. The Obama campaign looked more like a big company than like a startup. So I think the offline dimension remains crucial. People determine their political opinions to a large extent based on school, work and neighborhood relations. This is counter-intuitive, but the most cost-effective way to send a political message is to go door to door with it. It’s still expensive, but it’s the most effective.

But there are also other ways to disrupt politics. With Emmanuel Macron, the idea was to go see what opinions people had, on a broad scale. Instead of using focus groups, we sent En marche! volunteers all over the country to go ask open questions around them. So we developed an application to collect the answers, and we made sure that, from a statistical point of view, volunteers were not just engaging with fellow-minded people. We wanted real political conversations to take place.

There are also other disruptive approaches : Axelle Lemaire organized the beta testing of a parliamentary bill. Citizens had the possibility of suggesting amendments on the basis of an initial version of a proposed new law, via an online platform. She received a lot of feedback.

Will this solve all the problems of our democracy? I can’t answer that question. But I’m confident that as long as you have elections, and in particular presidential elections, something like political parties will continue to exist. What Naval Ravikant wrote applies better to activists, to Greenpeace, or even to the Sanders campaign. But if politics must reach out to people who aren’t that interested in politics, then you need more than just social networks.

What is the strategic role of traditional media in politics today?

What we know is that the most effective factor in spreading a political message is the personal factor. The more you contact people on a personal level, the more effectively your message will be delivered. This means that traditional media tend to be the least persuasive channel when it comes to delivering a political message. Traditional media lack the personal dimension. Social media, by contrast, though less effective than face-to-face interactions, can be personalized to a far greater extent.

One thing that is getting phased out in France is campaign meetings.

Naval Ravikant emphasized the impact of the insurgent candidates in the 2016 American campaign. Both Trump and Sanders did a lot of meetings, and Trump seems to allocate less resources to traditional media. What’s your take on that?

Trump is the counter-example to everything I’ve just said. His campaign is absolutely old-fashioned. He doesn’t use any of the innovations of the past 15 years in the field of political campaigning, it’s as if nothing had happened. He lacks boots on the ground to run door to door operations. His social media strategy is his own character. He’s good with Twitter, he’s good with television. And he does lots of meetings, with not many people, just his own supporters. He does exactly the opposite of everything I’ve been saying. As a consequence, there has been a lot of debating within the political science community. People were wondering if they had it all wrong, or if Trump was running a bad campaign and would end up getting crushed. The latter looks more probable right now [23rd of August]. It’s quite possible that in six months, the Trump campaign will be judged very harshly. He is successful in his TV appearances, in his media presence, but this might not translate into votes for him.

Another factor, which also applies to the Bernie campaign, is that Trump relies on an extremely motivated base of support. These people are behind him 100%. Social media are a good tool to mobilize this base. But what you need in politics is not 100% support from 5% of the population. A more diffuse level of support across a larger base is preferable. You need 51% across the entire population. In that sense, this shows a difference between politics and business. A 5% market share composed of 100% loyal customers who are willing to pay a higher price means your business will do well. But this doesn’t work in politics.

Ravikant also predicts that by 2020 political dynasties will be a thing of the past. What do you think of this prediction?

I certainly wouldn’t be against this. In France, “laprimaire.org” is an initiative aimed at countering the monopoly parties currently enjoy on the designation of credible candidates. Trump is again an exception here. It’s in America and he’s a billionaire… In any case existing parties are hardly good at selecting candidates: in France, they tend to favor apparatchiks and énarques. But “laprimaire.org” can’t be counted as a success either. It’s hardly an easy task. So I wouldn’t be opposed to such an evolution if someone figures out how to do it, but I don’t see this happening by 2020.

Actually I don’t have a hero. That said I wouldn’t have started this business if Obama hadn’t existed. Without the Obama campaign, we wouldn’t have had the idea to do what we’re doing. But overall I don’t think in terms of heroes. I draw more motivation from ideas. I want to make the ideas I believe in concrete. The way I define my goal with this company is that I believe in certain principles, and in a certain way to implement them scientifically. That’s what I’m trying to do. And in the field of politics, there aren’t many who do things in this manner. Politics is not technologically-minded. It’s a very conservative field, based on intuition. Politics is often viewed this way, as being intuition-based. If you ask François Hollande or Nicolas Sarkozy what their number one quality is, I’m convinced they’d answer: “I feel the French people.” I myself really don’t believe in that. I just think sometimes they fall on the right side, sometimes on the wrong side. That’s enough for them to persuade themselves that they have a special ability. But in reality it isn’t better than tossing a coin. So what we’re trying to do with this company is to break from these habits and adopt a more data-driven, more rational approach.

We would want to apply these methods to the field of behavioral modification in general, beyond electoral politics. I’ll take the example of our behavior when it comes to recycling. Recycling hinges on individual behaviors. In France, we’ve reached a glass ceiling that limits the adoption of optimal recycling behavior. We believe that the best way to improve this behavior is through the same type of campaign as what we already do when it comes to political behavior. This is the best way to get people to switch their behavior. Other relevant domains include health, risk prevention, taking pills, smoking less…

Thanks for your time Arthur.

It was my pleasure.