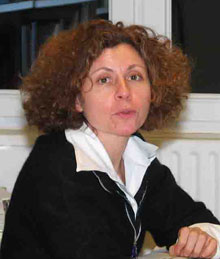 Frederique Sachwald, Ph.D. in economics, graduated from IEP Paris and University of Cambridge. Frederique Sachwald is Head of the Business R&D Department, Ministry of Higher Education and Research in France. She is the author of several reports on the open innovation.

What is your definition of Open Innovation?

I define Open Innovation as compared to its opposite: Closed Innovation. Within the Closed Innovation paradigm, the R&D department is a fortress. All ideas are generated internally and remain inside until a new product reaches the market.

In the Open Innovation paradigm, a company does not only rely on its internal resources (outside-in). In this approach, the company organizes and systematizes its openness towards the outside (Research partnership etc..)

What are the indicators of the adoption of Open Innovation?

In my opinion, there are three good indicators of the adoption of Open Innovation

Is Open Innovation just a fad?

No, I don’t think so. At European level, the outsourcing of R&D accounted for 15% of R&D budgets. This percentage may be even more important in some sectors such as pharmacy.

I don’t think Open Innovation is just a fad!

There has been a sharp increase in outsourcing and cooperation in the 1990s. Today, this growth appears less important. This does not mean that the adoption of Open Innovation is slowing, but that companies are get more and more structured and better organized in their approach.

Since less than 10 years ago, French companies have started seeking to identify partners worldwide (eg, Essilor established a set of shared laboratories in the world).

Does Web 2.0 helps the adoption of Open Innovation?

Let’s say that the Web 2.0 tools fit into a favorable historical context. The Web 2.0 has not created Open Innovation, but without any doubts, it allows its acceleration.

Companies that use platforms such as PRESANS have generally implemented various aspects of Open Innovation in their own strategy. These platforms are an extra channel, but they are not yet central.

What are the limits of the Open Innovation?

What is the future of intermediation platform such as PRESANS?

Innovation is needed, especially in this time of crisis. There is a propitious environment for the development of such intermediaries (adoption of Open Innovation, new technologies etc.). To allow these platforms to fully play their role, the environment still has to evolve (European patent, Intellectual Property etc.).

Intermediation platforms such as PRESANS will play an important role in the near future for incremental innovations. However, breakthrough innovations, will rather appear joint laboratories for example.