The human: a type of node in the Internet of Things

A perspective of the progress of humanity both dystopian and surprising by the philosopher Clément Vidal.

I will tell you the story of Celine. Celine is hyperconnected. She already has many friends in her network and could potentially have thousands more. Sometimes she realizes she has so many friends that she doesn’t really know them anymore. Celine is well in her bubble, but she is afraid for her privacy. Could viruses exploit his data? Who has access to what she does? Who really influences it?
Celine has tried to disconnect. But this is no longer possible. She is too dependent, and can not go back. Celine, as an individual is rather slow, but she knows that there is an extremely fast information system, something immensely more complex, dizzying that is being built around her.

She asks herself, “Am I surrounded by a kind of superintelligence? Can I understand it one day, with my limited abilities? ”
She heard about the power of GABA, saying they would control the information.

Today, Céline loses her bearings, her identity. She has information that comes from all sides. She is in a confusion between the feeling of seeing her boundaries widen and the feeling of dissolving.

Celine receives too many messages from her environment, too much pressure from her “friends”. She feels useless. Enough is enough. She, unfortunately, sees only one way out: suicide. The post-mortem analysis is clear: Celine is dead … of apoptosis or cell death. Like millions of others today.

Celine was a cell.

Are we, as individuals integrated into a global, hyper-connected world that we can no longer grasp with our cognitive abilities, do we enter or even create our own dystopia?

To answer these questions, we must realize that our world is not a Walt Disney film where good and evil are clearly separated. In fact, the interpretation of good and evil depends on the scale to which we look at the world. Let’s take three different scales: the individual, the human species and evolution on Earth.

The first scale: the individual

Does Celine the cell live a dystopia from his point of view? Of course, since she’s dying! But if we change the perspective to the scale of our body, we practice slavery and murder … cell! We agree to have 30 trillion cells working to keep us alive. Worse, we accept that our body kills 60 billion cells a day! But if Celine were human, Celine’s story would seem unacceptable to us …

So we have a hard time accepting that we can be part of a kind of planetary brain made up of humans and artificial agents that are smarter than ourselves and who might control us.

The second scale: The human species

Let’s look at the human species. Many are afraid that it will disappear with the technological and climatic changes in which we are. These fears are based on an argument from the theory of evolution that tells us that 99.9% of the species that existed have disappeared. Why should humanity be the exception, the 0.1%, rather than the rule?

From the point of view of the evolution of life on Earth, the extinction of a species is not a drama, but something normal, regular and predictable.

Evolution has undergone major transitions, such as the origin of chromosomes, sexual reproduction, or multicellular organisms.

Futurologist Kevin Kelly argued in his book What Technology Wants that the invention of language is a pivotal moment in evolution, which has allowed the development of culture and technology. This has led to the technological evolution that you know, from the invention of writing to the press, and recently to the Web and the Internet.

Today Internet enters a phase where it couples with the physical world, on all the planet: it is the Internet of the objects which forms a new techno-ecosystem.

The result is that we live at the beginning of a techno-diversity in the explosion but also of biodiversity in decline. The question for success in this major transition is, therefore: How to develop and regulate together the natural ecosystem and the techno-ecosystem?

With the Internet of Things and the explosion of techno-diversity, humanity is becoming a type of node in the Internet of Things. Humanity may be threatened with extinction, but is also giving birth to technological life. Is this major transition in evolution a dystopia? Yes, if we are focused on the individual or the human species. No, if we take an evolutionist perspective. The real challenge today is to develop new values, and a new consciousness, not only ecological but also techno-ecological. 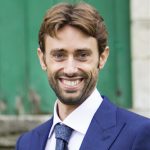 Dr. Clément Vidal is a philosopher with a background in logic and cognitive sciences. He is co-founder of the Evo Devo Universe community and founder of the High Energy Astrobiology prize. In 2014, he authored The Beginning and the End: The Meaning of Life in a Cosmological Perspective. He is eager to tackle big questions, bringing together areas of knowledge such as cosmology, physics, astrobiology, complexity science or evolutionary theory.

← Gérard Mourou and his lasers of extreme power Interview with Sandra Einerhand, former Scientific Program Director at Danone and Explorer at Presans →