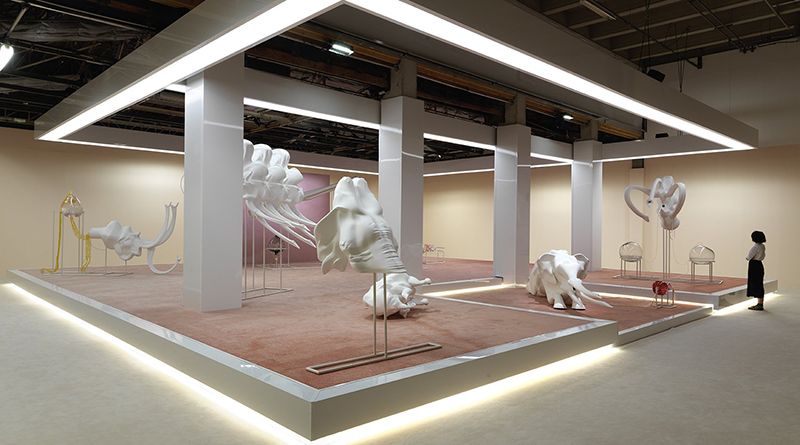 Marguerite Humeau is a “disruptive” artist (Stanislas de Bentzmann, Devoteam Group CEO and patron of this exhibit) whose latest work is an exploration of the origin of our humanity (Palais de Tokyo exhibition). Based on the Jared Diamond inspired idea that consciousness comes with language, and that language was made possible by a chance gene mutation, she imagined what a similar mutation might have produced in the case of a different species. She decided to focus on Elephants, who are, as things stand, already considered to to have a high degree of intelligence and memory. Some of the sculptures represent a primordial act of mourning and agony, accompanied by a soundtrack synthesizing the proto-language and chanting of the conscious elephants. Various substances, including hormones corresponding to sadness, and ethanol, have been injected into the sculptures. The carpet contains chemical components matching the composition of the human body, plus a distillation of datura poison.

Humeau’s method is based on engaging a lot of discussions with scientists: in the case of this project, linguists, elephant experts, even explorers of Siberia, where frozen mammoths can be found. She claims a 50 percent response rate, and attributes this relatively high figure — you can trust us about that — to the interest generated by her questions, as well as to the paternal attitude many scientists adopt towards the young woman. Other success factors sounded more familiar to the Presans veteran that I am: grounding the interaction on a familiarity with a body of work being the most fundamental. Where Presans could also learn from her approach is that experts seem strangely willing to reply to her interrogations, sometimes with as much as four page responses — entirely for free.

All joking aside: as Palais de Tokyo expo curator Rebecca Lamarche-Vadel suggested, poetry becomes possible on the edge of science, where scientific answers are no longer possible.