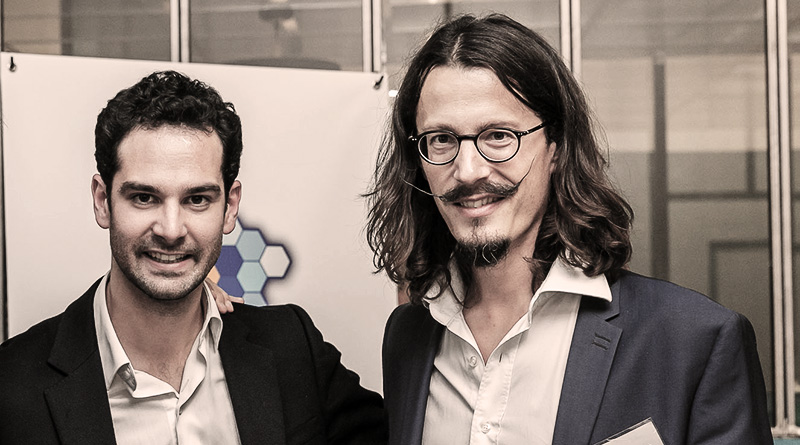 Albert Meige and Rémi Larrousse are both exemplars of a rare breed of magicians / entrepreneurs. They recently embarked on a completely new type of project: delivering innovation + magic corporate seminars for project-oriented companies who want to revamp their innovation strategy. In this interview for Open Your Innovation, they provide some background on this unique offering.

How did you guys meet?

Albert: I went to see Rémi’s show. Then I googled him and I first thought there was another Rémi Larrousse who was an innovation consultant who’d gone to Sciences Po. After a while I eventually figured out both were the same person. Then I contacted Rémi through LinkedIn. It turned out we share a lot of connections… and passions, including magic & innovation.

Rémi: And I actually knew who Albert was, because of my interest in innovation.

Albert: At first I was just curious to know more about Rémi. He has an interesting profile that combines innovation consulting and illusionism. So we just had an exchange without ulterior motives, over several months. And then I decided it would be great to have him at the Presans Raout event. Innovation and magic seem to lie worlds apart. How can both complement each other?

Rémi:  There are parallels between the way disruptive innovators work and the way magicians work. For one, magicians were historically heavy users of cutting-edge science and technology. Magicians are drawn to knowledge that isn’t in the public domain yet: electricity, magnetism at first were little known phenomena and magicians exploited the lag.

Albert: They used it to develop tricks, but also to provide misleading explanations of these tricks. They would protect their knowledge assets by adding false physical explanations to their narrative. Jean-Eugène Robert-Houdin used mechanical tricks to make his son levitate. But he’d explain the trick by telling the public his son had inhaled a large quantity of aether. He would even have aether cooking backstage to fill the audience hall with the smell of it.

Albert: Another aspect is hiding complexity from the user. Design is a huge part of innovation.

What do you bring to the table for companies?

Rémi : Companies are becoming more and more project oriented. We bring two essential ingredients that companies, whether at the executive board or at the operational team level, absolutely need in order to run commando-style projects. The first is engaging project participants, both from inside and outside. You need to find them, qualify them, and mobilize them. This is what Presans does on a day to day basis. We deliver the experts. The second factor is that you need a method to get the most out of your team for the project. Because by now companies know that no consultant is going to walk in and fix their problems for them. Only the companies themselves have the ability to solve their own problems.

Albert: And this is where Rémi comes in. He brings his method, based on his knowledge of cognitive biases and mentalism, to catalyze the performance of a team. He has the ability to shake things up in a productive way. It’s very liberating. Overall, Rémi and I share one trait: we both combine the ability to approach innovation with rigor and from an original angle. We help companies find their own path to change the game, on a strategic level.

What is the latest innovation + illusionism project you’ve done?

Rémi: We spent a day and half with the executive board of a chemicals company, to help them focus their thinking on which new territories they should be exploring. Albert introduced this session with a conference on disruptive mega-trends that are impacting the chemicals industry. Then I provided tools based on mentalism and magic to activate the collective intelligence of attendants. In the afternoon, experts identified by Presans were brought in to help identify new territories. By using creativity methods based on mentalism and magic during the afternoon and the next morning, the board was able to finally identify six promising new territories, as well as concrete actions to start their exploration and expand their growth. This output took shape as a mid- and long-term action plan.

Need to make sure your company doesn’t get blindsided by disruption? Are you looking for a methodical way to inject creativity into your corporate innovation strategy? Albert and Rémi will help you shake things up and get the most out your internal and external experts in order to deliver an actionnable strategic plan.

If changing the game is the challenge you are facing, make sure you have the right tools and mindset: make sure you book a session with Albert and Rémi!

Albert Meige has been an entrepreneur since his teenage years, when he began by selling magic ! He is now the founder and CEO of Presans, a global digital platform of experts. He is also the Director of the Executive MBA of the Institut Mines-Télécom. He is an expert for the Harvard Business Review France. Trained as a Telecom Engineer, he also holds an MBA from HEC Paris business school and a PhD in Physics from the Australian National University. In 2008, the French École Polytechnique awarded him its Innovation Prize. He has authored several books in his area of expertise, including Innovation Intelligence (2015), as well as over a dozen peer-reviewed academic publications and also holds two patents. Albert can solve the Rubik’s Cube in less than fifty seconds and loves urban underground exploration…

Rémi Larrousse received his diploma from Sciences Po Paris and worked for eight years as an innovation and strategy consultant in various consulting firms. A practitioner of illusionism since his childhood, he created and executed over four hundred times two shows combining theatre, illusionism and mentalism. He bases his seminars and corporate events on the art of illusionism, used as a tool for communication and human training and development.