Thierry Mandon’s Four Point Plan to Save the French Industry 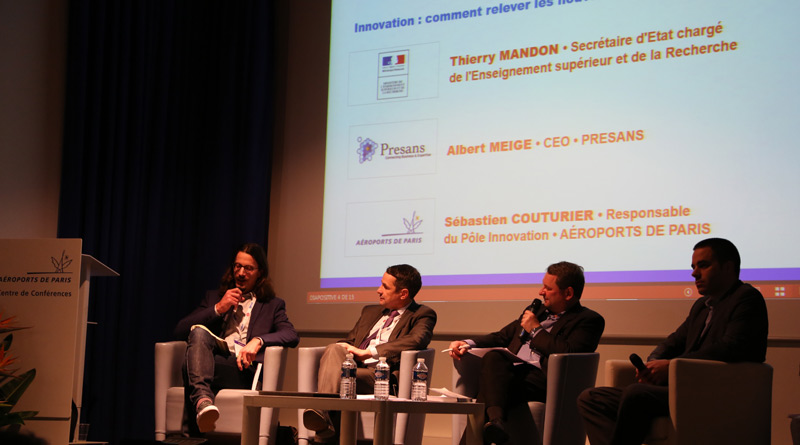 Techinnov happened a couple of weeks ago. Now in its tenth year, this cross-industrial trade fair has become an important component of the Île-de-France innovation ecosystem. Once a year in February, the upper floor of Orly airport thus turns into a marketplace for large industrial companies, suppliers, labs, consultants, startups and investors. Together they represent a big chunk of the local innovation ecosystem. They were there mostly  to do business: 9000 scheduled meetings took place. A dedicated free meeting zone added a touch of spontaneity to the proceedings.

Presans CEO Albert Meige participated in a roundtable organized to kick things off, alongside Sébastien Couturier, Innovation Manager at Aéroports de Paris, and Thierry Mandon, Minister of State for Higher Education and Research, no less!

Hosted by journalist Arnaud Fleury, and introduced by Techinnov President Jean Chavin, the discussion focused on the realities of innovation in France today.

As an early supporter of the event, back when it was just about connecting large companies and suppliers, Thierry Mandon sees Techinnov as part of a broader strategy to re-densify the industrial tissue of France through high-end innovation. He stated the need to improve four things in the future: 1) the ecosystem is burdened by an excessive number of institutional players and layers 2) IP management needs to be simplified 3) the French provinces need more shared technological platforms 4) companies need to hire more PhDs.

Albert Meige stated the need for interfaces capable of harmonizing the very different processes and time horizons of startups, large companies, and labs. This need is reinforced by the three key trends impacting innovation: knowledge inflation, commoditization and digitalization. Albert Meige explained how even capital-intensive industries such as aircraft manufacturing are susceptible to commoditization by digital barbarians.

Thierry Mandon agreed that these trends are real and characterized them as a process of horizontalization. He stressed the difficulty of the challenge faced by organizations: they must transform but don’t have time for change. He also emphasized the fact that the organizational change agents they need to accomplish their goals exist only in limited supply.