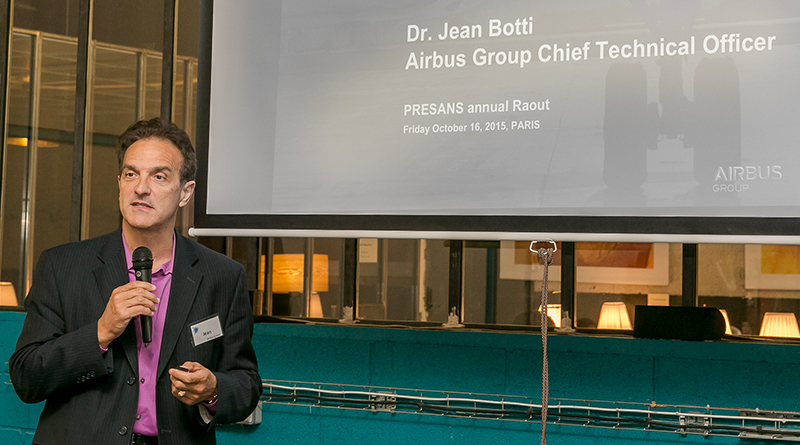 Last Friday, Presans brought in an innovation heavyweight for its annual Raout. After being introduced by Albert Meige, CEO of Presans, and Philippe Lavialle, President of the Chamber of Commerce of Essonne, Airbus Group Chief Technical Officer Dr. Jean Botti delivered a series of powerful punches to the gut of corporate complacency. Airbus tripled its revenue and now employs 130 000 people, however, to quote from Botti’s presentation, “death is something that can happen to people in good health”. Indeed, it is a rough and tumbling world out there. Barbarians are coming for the established businesses, and they are coming fast. They ride the waves of digitalization in startup mode, even as their capitalization and cash assets number in the tens and even hundreds of billions of dollars. A harsh fate awaits those lulled by a false sense of safety: to fall asleep in merry monopolyland, and wake up in blasted commodityland. According to Botti, the true marginalizing threats to Airbus’s business take the shape of entities such as Space X and Titan-Google. The data-hungry barbarians are spending on satellites. Soon, their digital gaze may fix itself upon aircrafts. The plan for Airbus is to already be a B-to-C digital player by then and leave the role of easy GAFA prey to others. One should not forget where Airbus is coming from. Nine years following its creation as the successor to EADS, corporate integration and consolidation remain central issues. The influence of national cultures (often positive) and political factors (often negative) persists. Within this context, the barbarian threat and the general theme of digitalization provide a good opportunity to tighten the ranks and become truly global. Digitalization starts inside with tools such as mixed-reality tablets that improve cultural coordination, hopefully eliminating the risk of A380 cable-mismatch-type disasters. The next stop for the digital revolution is the architecture of robotized factories, followed by the core business models. On the outside of this core, Airbus establishes partnerships with startups operating in areas such as luggage inspection, 3D printing, and landing helicopters in rough environments. The last logical step in this process is of course to become a barbarian yourself: to gather your horde of bold pioneer-types in a sortie, set up camp beyond the walls of the mother-corporation, and strike with speed on your target. This is exactly what Jean Botti did with his E-Fan project. Beyond the confines of corporate Procurement and HR, a garage got set up in Royan where the spiritual sons of Blériot gathered, engineers and workers, extracting themselves from their corporate abodes, travelling from Villaroche and Toulouse on weekends to hack out an electrically-powered Channel crossing by flight, in homage to the mustached Frenchman’s 1909 stunt.

What is speed? Eighteen months is speed. That is the time it took to produce the first version of the E-Fan aircraft, to be followed by others. Today, the electric plane serves a training purpose. Already it features a digital cockpit that leverages the pilot’s flight-hours. Tomorrow, the learning curve it will have contributed to generate will prove crucial to build hybrid airplanes capable of transporting a hundred passengers. The E-Fan is true disruptive technological innovation in the sense of Clayton Christensen. What other disruptions await? Jean Botti expects not only the airplanes of the future to adopt surprising designs. The way experts are managed also needs to change: a message keenly heard by Albert Meige. Yet all is not about revolution in his vision of a European industrial renaissance. Past glory lies not forgotten, as our honored speaker and veteran of electric transportation did not fail to emphasize during the ensuing 45 minutes of Q&A.

In a few days, we will post an exclusive interview of Jean Botti Here. Stay tuned!